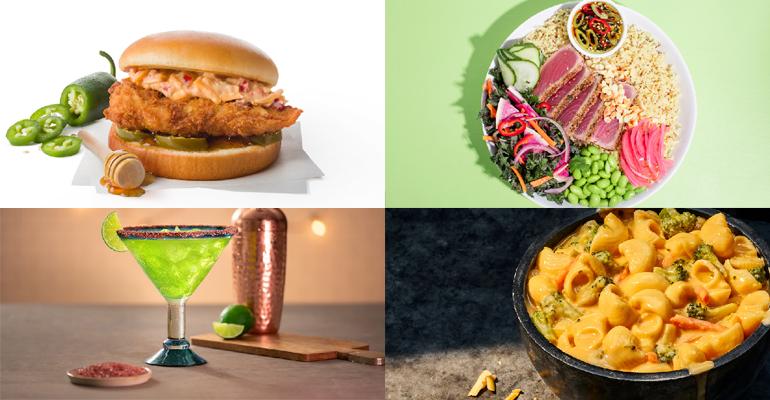 We’re nearing the end of American blueberry season, and restaurants are celebrating with items such as blueberry doughnuts at Paris Baguette, a sandwich with ham and blueberry jam at Coolgreens and a blueberry Margarita at Bennigan’s.

Bennigan’s is also celebrating Oktoberfest, which it calls Benntoberfest, with a returning line of autumn-oriented menu item, and Dog Haus is bringing back its cheese-stuffed Oktoberwürst, along with a new meal kit for guests to cook them at home.

Panera Bread is taking a step that, in retrospect, is obvious: Combining its popular broccoli cheddar soup and popular mac & cheese and selling broccoli cheddar mac & cheese, while Chick-fil-A, in what it says is its first test of a seasonal variation of its signature sandwich, is testing a Honey Pepper Pimento Chicken Sandwich in parts of the Southeast.

In beverage news, drive-thru coffee chain Dutch Bros Coffee has introduced its take on the pumpkin spice trend, the fall lineup at PJ’s Coffee includes its version of the trendy golden latte, made with turmeric, and Red Lobster has teamed up with MTN Dew to make a signature Margarita.

In other unexpected drink news, Taco Bell Canada has introduced a custom-made wine at two units, only available via Uber Eats, to promote the new Toasted Cheesy Chalupa, which is now available across Canada and is expected to be brought to the United States in November.

Carl’s Jr. has a similar gimmick underway in California.

Speaking of collaborations Einstein Bros. Bagels has teamed up with sous-vide experts Cuisine Solutions to make a bagel-shaped sous-vide egg, that the chain is selling as a gluten-free bagel, and Hot Head Burritos is letting guests top any of their menu items with Doritos tortilla chips or Fritos corn chips for $1.

Hurricane Grill & Wings is offering a bunch of new bar snacks for the season, and bringing back a grilled, sliced steak with chimichurri, Ruby Tuesday has four new pastas, and Smokey Bones has a whole new lineup of meat dishes

Lemonade has introduced a tuna taco, Fuzzy’s Taco Shop has a new mahi mahi taco, and in an almost frightening coincidence, both Rusty Taco and Velvet Taco have taco versions of the Philly cheesesteak.