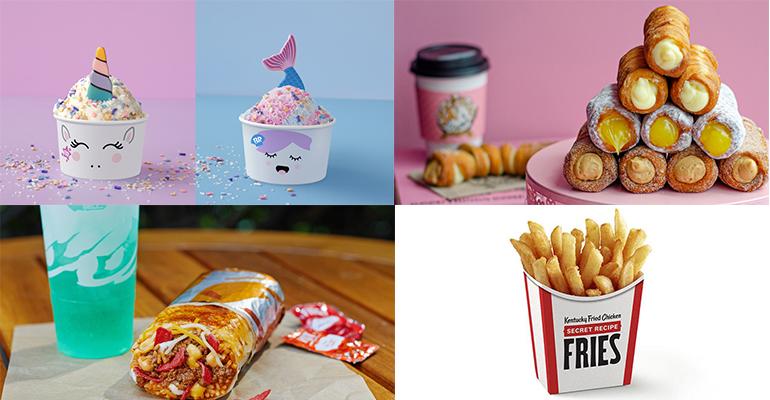 Taco Bell now has a grilled cheese burrito, and KFC is rolling out the French fries that it tested last year.

Velvet Taco has long enjoyed using the double-entendre WTF to describe its weekly taco feature — this week highlighting fried green tomatoes — and now Torchy’s Tacos is playing a similar game with its taco of the month, The Prawn Star.

Big Boy is tossing its hat in the chicken-sandwich ring with its new Dolly sandwich, and in a play reminiscent of both IHOP’s IHOb stunt, and the current movement to topple statues and rename mascots, some franchisees are replacing the apple-cheeked young server positioned outside their restaurants with a fresh-faced young lady named Dolly.

In an unusual coincidence, both Pasqually’s Pizza & Wings and Slim Chickens are introducing new rubs for their fried wings, and they’re both introducing lemon pepper as one rub and a spicy-sour rub as the other —  chile lime at Pasqually’s and cayenne ranch at Slim Chickens.

Noodles & Company is introducing a new item in its mac & cheese line, Voodoo Doughnut is expanding its cannolo offerings, Snarf’s Sandwiches is bringing back its Cubano, Whataburger has a new option topped with pico de gallo and cilantro lime sauce, and Yogurtland has a new vegan frozen dessert.

Grimaldi’s Pizzeria is celebrating summer with a barbecue chicken pizza, and Baskin-Robbins is doing so with three cute ice cream creations.