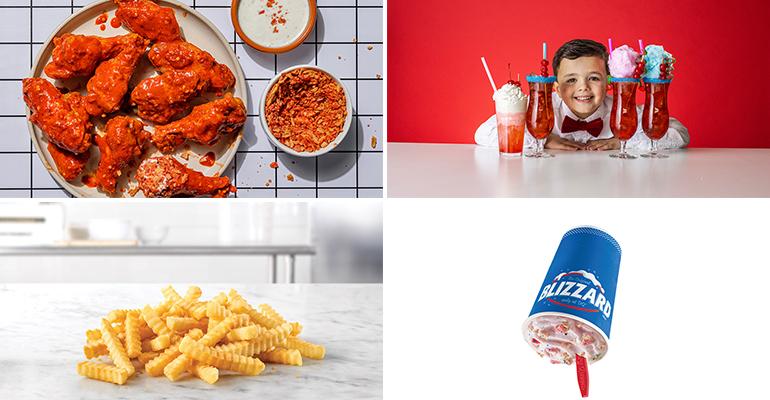 As more people are getting vaccinated against the novel coronavirus and dining room restrictions are lifted, there’s a feeling of hope in some circles, and anticipation of a robust and celebratory summer.

That’s the vibe that TGI Fridays is giving off with its Under the Big Top menu, featuring  outrageous items like the Flaming Donut Chicken Sandwich and a skewer that has three sliders and six boneless wings all on the same stick.

Less grand, but still celebratory are the new triple burgers and double chicken sandwich that sister chains Carl’s Jr. and Hardee’s have rolled out to celebrate the United States release of the Warner Bros. Pictures film Godzilla vs. Kong.

Torchy’s Tacos is bringing back its Scallywag, made with coconut shrimp and peach habanero jam, among other things, as its Taco of the Month, and that’s just one of the new spicy items out there. Jolene’s Wings & Beer, the virtual brand of Lazy Dog Restaurant & Bar, has introduced its spiciest wings yet and Texas-based convenience store chain TXB/Kwik Chek is testing Scorpion Bites.

Farmer Boys is bringing back its spicy chicken sandwich, as well as its unspicy one, as permanent additions to their menu and Whataburger has fried chicken strips in Buffalo sauce in a salad as well as on a bun.

Dairy Queen is offering chicken strips with mini-biscuits and country gravy, which kind of sounds like something you’d find at Cracker Barrel Old Country Store, but that chain has rolled out a Prime Rib dinner for Easter, a holiday that Voodoo Doughnut is celebrating with a Peep-shaped pastry stuffed with creamy marshmallow filling.

There’s a lot going on in beverages this week. Starbucks has introduced a new Odyssey Blend, meant to highlight the traceability of its coffee, Applebee’s Neighborhood Grill & Bar has two $5 cocktails, Baskin-Robbins has a spiced mango slush, Del Taco has lemonade with bursting balls flavored with peach or blueberry, both Sonic Drive-in and TGI Fridays are selling Red Bull slushes, and Kung Fu Tea has three slushes named for characters in the Funimation anime series Fruits Basket. Main Event, meanwhile, has a new line of Shirley Temples designed with the help of Instagram star Leo Kelly.

Unfamiliar with Fruits Basket or Leo Kelly? Then you’re not in the target market for those promotions, and that’s okay.

There are new pizzas from Ledo Pizza, Round Table Pizza and Your Pie, and Pizza Inn has a new garlicky crust.

And finally, Velvet Taco’s Weekly Taco Feature is made with fried goat cheese.