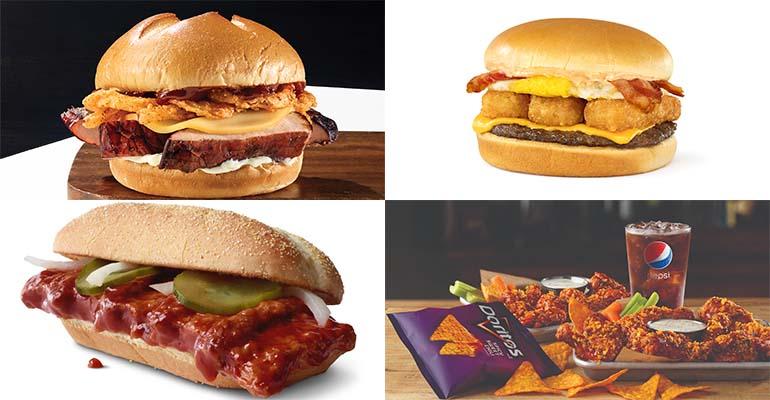 It’s actually not true that McDonald’s has a new item, but it is bringing back its cult favorite McRib (although not until November), and for the second year in a row it’s rolling it out nationwide.

Arby’s is clearly not impressed. Although it doesn’t explicitly call out the Golden Arches in the launch of the Real Country Style Rib sandwich — it’s more the style of Wendy’s and Burger King to call out McDonald’s by name — the name of Arby’s sandwich makes the target obvious.

With October basically upon us, some chains are rolling out Halloween-themed items, including Applebee’s, Baskin-Robbins and Fuku.

Fuku’s is possibly the first Halloween-themed chicken fingers, which is kind of surprising considering that they’re called fingers.

Related: Menu Tracker: New items from IHOP, Jack in the Box and Panera

Pumpkin spice season continues apace. Nekter Juice Bar rolled out several pumpkin items last month and we forgot to mention them, so their items are featured this week.

Cinnamon, the most popular of the pumpkin spices, is on display on its own at Creamistry and Krispy Kreme, but other chains have other priorities. Chiles are being harvested now, so Whataburger is bringing back its green chile items, and a new James Bond movie is out which Studio Movie Grill is celebrating with a special cocktail. It’s not shaken, but you can’t have everything.

The music festival Austin City Limits is about to start, and Torchy’s Tacos has a special taco to celebrate in collaboration with the band Black Pumas.

The Habit Burger Grill is reprising its Chicken Caprese sandwich from last year, Velvet Taco’s Weekly Taco Feature is a perennial favorite, and Lucille’s Smokehouse Bar-B-Que is bringing back its Chicken Shack menu, sort of — it’s still called Chicken Shack but the menu items are different.

Condado Tacos has a new taco, bean dip and Margarita.

Dash In has a breakfast sandwich made with an inside-out doughnut and Dairy Queen has cheesy steak fingers, but only in Texas.