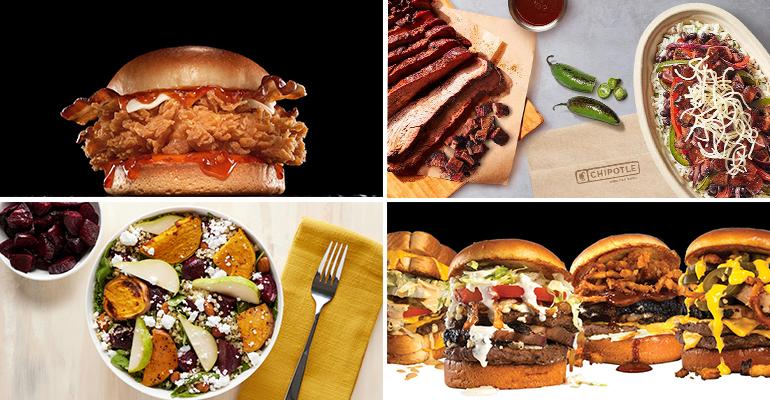 The big news is that Chipotle Mexican Grill is now selling spiced, smoked brisket for a limited time, but there are a lot of other new menu items out there.

If it’s brisket you’re after, Big Deal Burger, one of the virtual brands of Dickey’s Barbecue Restaurants, has several new burgers topped with the meat.

In other promotions, Just Salad has a new Earth Bowl, and $2 of every sale goes to plant trees.

Chick-fil-A has once again selected Salt Lake City, Utah, as the testing ground for a new milkshake, something it also did this past spring.

Bellagreen, Bonefish Grill and Rock Bottom Brewery all have a bunch of new menu items for the fall. Dave & Busters has new Tailgate Towers, serving 10 servings of cocktails and recommended for four or more people, and Old Chicago Pizza & Taproom is selling canned Paloma cocktails at restaurants in Colorado.

Juice It Up! has new ginger and horchata options, Lion’s Choice is playing with apples, Lee’s Famous Recipe Chicken has a new bourbon glaze for its nuggets, and Velvet Taco has turned its elote into chips and dip, sort of.

Romano’s Macaroni Grill has a new chicken entrée and a fried lasagna snack, Wow Wow Hawaiian Lemonade has a new avocado-and-egg sandwich, among other things, and Voodoo Doughnut has two seasonal pastries.

Clarification has been made of the availability of the hot honey items at Carl's Jr. and Hardee's, and more details have been added to Rock Bottom Brewery's and PDQ's menu descriptions.
Start Slideshow ›
0 comments
Hide comments
Related
Sponsored