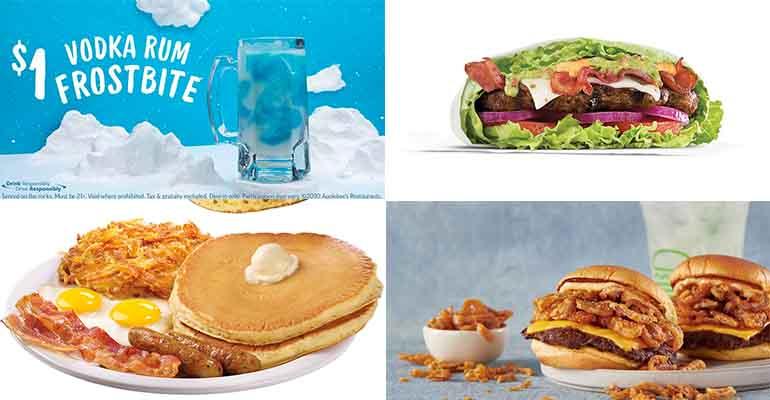 With every new year come new resolutions, often including a vow to eat more healthfully. Some chain restaurants are eager to help with that. This year that includes new items that comply with the ketogenic and paleo diets from Carl’s Jr. and El Pollo Loco. Along similar lines, Velvet Taco’s “weekly taco feature” features a keto-friendly taco made with a cheese-crusted egg instead of a tortilla.

Coffee Bean & Tea Leaf is experimenting with letting its customers “lighten” some of their drinks with nonfat milk, less powder and syrup and no whipped cream, while Del Taco once again is bringing back its seasoned turkey meat. For its part, Habit Burger Grill has introduced sautéed Brussels sprouts as a side.

But it’s not all about dieting. Denny’s has introduced a Super Duper Slam featuring all the pancakes you can eat, and Fazoli’s has rolled out a bunch of new mac & cheese options, plus cheesecake.

Roy Rogers, meanwhile, is introducing a brand new protein: Brisket. It’s being featured on top of a burger and in a breakfast skillet.

Read on to see what else is new at chain restaurants across the country.