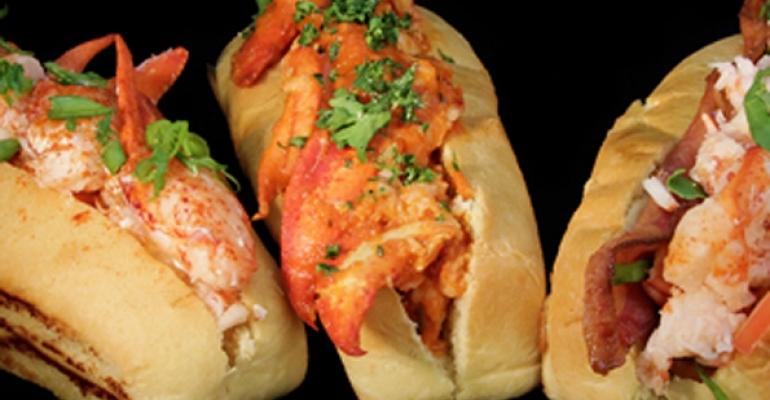 Every year around late spring, they start cropping up on menus: Lobster rolls, the iconic summer sandwich that originated in New England. In the last few years the East Coast favorite has become even more popular, appearing on more menus — and in more variations — all across the country.

According to market research firm Datassential's MenuTrends, which tracks over one million different menu items at more than 7,000 chain and independent restaurants, lobster rolls have grown steadily and appear on 52 percent more menus that just four years ago. They can now be found on 2 percent of menus where sandwiches are offered.

With an average cost of more than $15, the premium crustacean-filled sandwiches are most often found at fine-dining restaurants, where they appear on 6 percent of sandwich menus, according to Datassential. The next most popular place to find lobster rolls is casual-dining restaurants, where 3 percent of sandwich menus feature them. The sandwich appears on less than 1 percent each of midscale and quick-service menus.

Though the rise of the pricey roll has coincided with the economic downturn, many restaurateurs aren’t surprised that the sandwich is gaining traction.

Chef Jasper White has been serving lobster rolls in his restaurants since the 1980s. At his Jasper White’s Summer Shack restaurants he currently serves a classic Maine-style roll made of lobster meat with homemade mayo and cucumber on a buttered, griddled split hot dog bun.

“If you look at a lobster roll, it’s a pretty humble creation,” said White. “The contrast between the warm griddled buttered bun and the cool refreshing lobster salad … It’s just this understated elegant dish that fits with the New England character.”

The humble-meets-luxurious nature of the sandwich is part of what prompted LEV Restaurant Group to open Lobster Me, a fast-casual eatery dedicated to the crusty protein, last year in Las Vegas.

“When times are bad people want to spend on things that feel good,” said Zachary Conine, head of development for LEV Restaurants. “With the lobster roll it’s a way for people to get access to a thing that’s a little higher end.”

Though traditional lobster rolls still reign, a host of restaurants, including Lobster Me, have begun using the sandwich as a vehicle for delivering bold, ethnic flavors or variations on the theme. Lobster Me, for example, recently rolled out three new ethnic options: The Cajun, featuring Cajun spices, seasoned mayo and fresh lemon; the Diablo, warm lobster with spicy marinara sauce; and the Lobster BLT, which tops lobster with applewood smoked bacon, mayo, lettuce and chopped tomato.

Smaller versions of lobster rolls are showing up at menus across the country at places such as 5 Napkin Burger, a chain with locations in New York, Boston, Miami and Atlanta. The seven-unit chain offers Lobster Roll Sliders that consist of lobster with mayo, scallions and cucumbers on mini brioche rolls. And Devon Seafood Grill, with five locations in Pennsylvania and Illinois, offers Mini New England Lobster Rolls with chilled lobster salad and watercress on buttered, toasted sweet rolls.

Other chains are adding lobster rolls to their menus as limited-time offers, and New England-based 99 Restaurant is among them. The chain recently introduced the Colossal Lobster Roll, which is lobster meat blended with mayo and celery and served on a grilled roll topped with shredded lettuce.

Though the pricey rolls appear the least in the quick-service segment, several chains lately have added their versions to menus, also as LTOs. For example, in March, Quiznos rolled out the Lobster and Seafood Salad Sub, featuring lobster and seafood salad with lettuce on buttered toasted artisan bread.

And in June, Au Bon Pain began offering a Lobster Salad BLT as part of its Sandwich 2.0 menu. The sandwich is made with lobster meat mixed with light mayonnaise that's topped with applewood smoked bacon and sliced tomatoes and served on a lightly toasted eggless brioche.

Editor's Note: A previous version of this story incorrectly stated that Uno's Chicago Grill is currently offering a Lobster Melt and Au Bon Pain is offering a Lobster Salad Sandwich. Both of those menu items were offered in the summer of 2011 and are no longer available.