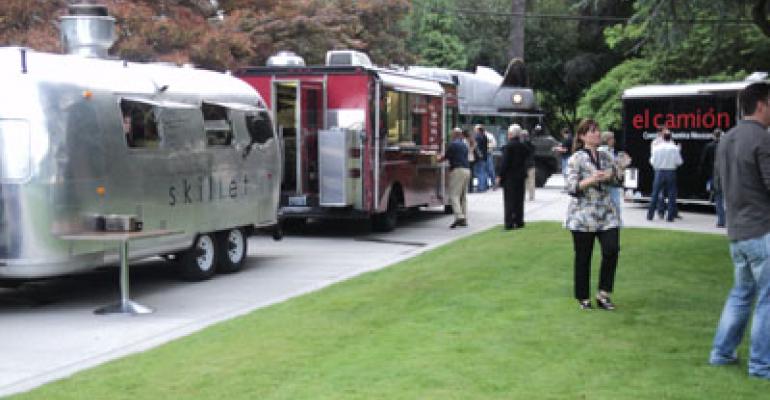 ICCA: State of the culinary world

Food policy, local fare and culinary techniques shared the spotlight during the ninth annual summit of the International Corporate Chefs Association, with independent operators at one point challenging their chain brethren to change the country’s food system.

Christine Keff, chef-owner of Flying Fish restaurant in Seattle, said the ICCA’s members — chefs of chain restaurants, non-commercial dining facilities and other large scale foodservice operations, as well as sponsoring suppliers — have the ability to influence agricultural policy, “so that all the money we spend on subsidies goes to raising better food. Whatever you can do whenever you think about it to put some of your muscle behind it would be a great thing.”

Others reinforced that message.

“You guys know as well as we do that the better produce you buy… the better feedback you get from your customers,” said Matt Dillon, chef-owner of Sitka & Spruce, also in Seattle. He added that he believes most of the best products come from smaller producers.

Laurie Demeritt, president and chief operating officer of the Hartman Group, a Seatlle-based consumer research firm, talked about the importance to consumers of food with a narrative. Diners want to hear about the people who produced their food, how they did it, where it comes from and why it is unique, she said.

Demeritt noted that even McDonald’s has played the local card in Washington by pointing out that most of the potatoes it uses in the state are local. She also noted that Lay’s potato chip bags have chip trackers that let consumers go online to find out where their potatoes come from.

Attendees — including the heads of research and development from Arby’s, P.F. Chang’s, Red Robin, IHOP and HMS Host — explored other issues as well, including seafood prices and their craft.

Nathan Myhrvold, co-author of the six-volume opus “Modernist Cuisine,” discussed with the approximately 100 attendees how he developed best practices for cooking the items in his book.

For example, he showed a video of his rib preparation, which begins with cooking the ribs in sous-vide at 140 degrees Fahrenheit for 48 hours. Then he applies a spice rub and smokes the ribs. Next he dunks them in liquid nitrogen for 30 seconds to freeze “the outer couple of millimeters” before deep-frying it in oil heated to about 400 degrees Fahrenheit.

Freezing the outside of the ribs keeps them from overcooking while getting crisp, he explained.
For the ideal scrambled eggs, he advocated throwing away one egg white for every three eggs and then cooking them in a combi oven to 164 degrees Fahrenheit.

Seattle-based chef and restaurateur Tom Douglas told the corporate chefs, “I’m one of you and you are one of us,” noting that he currently is doing work for Amtrak and Macy’s.

“I’m so impressed with the state of American food,” he said. “You can have a great meal anywhere, and that certainly wasn’t the case when I moved here in 1977.”

While demonstrating his method for preparing king salmon, he discussed the development of some of his newer concepts, including a pizza place called Serious Pie and a Tibetan place near Amazon.com’s new offices called Ting Momo.

About a third of the conference attendees sampled the pizza at Serious Pie during a city tour that also included stops at a local noodle factory and boutique chocolate manufacturer, while others visited the Herbfarm and Château Ste Michelle winery outside the city. A third group ate sushi and toured one of the Trident Seafood’s production facilities.

Attendees also experienced the local food culture when a half dozen food trucks were brought to the Ste. Michelle Winery for the annual summit dinner. They sampled Thai chu chee curry with salmon as well as local versions of Mexican and Korean tacos and pork sliders.

Winding up the conference, executive director Kevin Ryan interviewed “The Deadliest Catch” star Sig Hansen about his adventures as a crab fisherman in the Bering Sea.

Hansen said that he, too, might end up going into the restaurant business, as he was in negotiations with Pincher’s Crab Shack in central Florida.