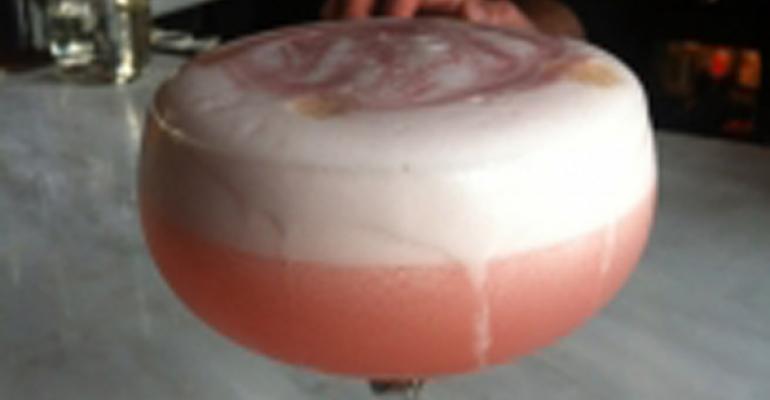 The beverage program at the new g.e.b. in Chicago reflects many contemporary trends, offering everything from modernized tiki drinks for the dinner crowd to koozie-wrapped cans of beer for off-duty employees of local restaurants.

“We want to be a breath of fresh air, not only for the neighborhood but for the dining scene in general,” said Rob Miezio, general manager and beverage director of the casual eatery, which launched on the same stretch of the city’s restaurant-packed Randolph Street as popular spots like Nellcote and Girl & the Goat.

The 100-seat g.e.b., short for Graham Elliot Bistro, is billed as “a playful ode to food, music and spirituality.” It is the third Chicago eatery for chef-owner Graham Elliot, who shows a whimsical and humorous side that is uncommon among high-powered chefs.

The beverages, like the food, reflect the imagination of Elliot, who also owns a Michelin-starred namesake restaurant and serves creations like grilled shrimp with black beans, mango salsa, guacamole and blistered corn on a chipotle tortilla at Grahamwich, his fast-casual sandwich shop.

Although the new place is making a name for tiki-inspired libations like the Sarawak Sling, a shake-up of Old Tom gin, smoked pineapple and lime, Miezio said that the g.e.b. bar staff has plenty more to offer.

Take the Mexican Lilly, a frothy concoction of tequila, grapefruit and egg whites.

“It’s a huge ringer and our fun take on a Daisy, using egg whites for texture and cutting the richness with a little ruby port,” Miezio said.

Another specialty is Stirred Cocktail #2, which combines rye whiskey, green chartreuse and Lillet into a cocktail that is “balanced and approachable” yet “packs a punch,” Miezio said.

Also attracting attention at g.e.b. are cans of beer served in house-branded beer koozies, insulated foam sleeves. In fact, the 30-item beer list is composed entirely of cans, priced at $3 to $9. It comprises craft brews from Chicago, the greater Midwest and as far afield as California, New York, and Belgium. There are also a few budget-priced “retro” beers, or mainstream American lager brands of the past, for good measure.

“The fact that cans reduce our carbon footprint is certainly great on the back end,” said Miezio, who said that along with being more sustainable than glass bottles, cans are also superior for protecting the flavor of beer from the effects of sunlight and air.

The $3 and $4 retro cans appeal particularly to foodservice folk from nearby eateries unwinding after work.

“We want to be a place where it is affordable and easy for industry professionals to have an ice cold beer,” said Miezio.

As it happens, clients of all types are enjoying the koozies, which are priced at $1 to take home.

“It is conducive to keeping your beer cold and your hand not, and it’s a fun takeaway for people,” said Miezio. “And it’s interactive. Whenever you put down a tray of beers, the people at the next table say ‘I want a koozie.’”