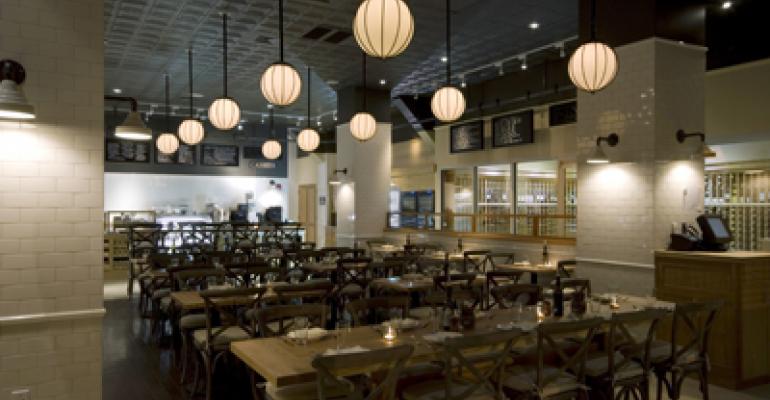 Carbonated cocktails may be the claim to beverage fame of Garces Trading Company in Philadelphia, but the European-style café and gourmet market has several other wrinkles for summer sipping.

The company is currently touting offbeat rosé wines, housemade signature sangrias and robust beers that a wine aficionado could love. And if patrons don’t see what they want on its 20-item wine list, they may stroll into an adjoining wine store on the premises to choose from scores of additional bottles at retail prices to enjoy with their meals.

“The clientele at GTC loves to try interesting wines and different varietals,” said Brandon Thomas, beverage manager of the eatery, one of the 15 restaurants in the Philadelphia-based Garces Group, which also operates one food truck and is helmed by Food Network television Iron Chef Jose Garces. “You will see a lot of wines here you would not normally see on by-the-glass lists.”

Take the Rosato, or rosé wine, section of the list, which offers three discoveries from Europe.

A rosé from Calabria, in southern Italy, made from the Gaglioppo grape is fresh and fruit-forward in style, Thomas notes. In contrast, a rosé made from the Hondarribi Beltza grape in Spain’s Basque country offers more mature flavors and is “almost bronze” in color, he said.

Add to that a Syrah-based rosé from Costières de Nimes in the western part of France’s Rhône wine growing region. “You normally think of Syrah as a very deep red wine, so it is unusual to see it as a rosé,” Thomas said. “It is fruity but it also has the terroir that the French like.”

There are also two signature sangrias with tweaked recipes: A red wine version called Milano that is spiked with Italian orange liqueur and bitters, and a white wine sangria called La Serena that is splashed with Peruvian pisco brandy and a spiced citrus liqueur from Spain.

In addition, Garces Trading offers a restaurant wine experience at retail wine prices, thanks to the 600-square-foot Pennsylvania state liquor store on its premises, the only such restaurant-retail combo in the state. Guests may walk over to the store, visible from the dining room through glass panels, to browse racks of bottles priced at retail rates as an alternative to ordering from the restaurant list, which has normal restaurant markups. The first bottle purchased at the wine store is opened at the table for no charge. Subsequent bottles are charged a $10 corkage fee, far less than the usual $25 corkage in Philadelphia eateries, Thomas noted.

“Some people like to order from the list and have the bottle delivered,” said Thomas. “Other people really like good wine and don’t want to pay the markup. So they pick out a really nice $30 Barbaresco or Barolo in the wine shop that they would pay $100 for in another restaurant.”

Beer fans may be drawn to full-flavored brews like American and imperial IPA and Belgian sour ale that go well the Iron Chef’s cooking, Thomas said.

“Philadelphia is a huge beer city, but I’m a wine guy,” said Thomas. “The beers I go for are robust beers with a lot of complexity, like Petrus Aged Pale, which is aged in used wine casks. It’s a wine drinker’s beer.”