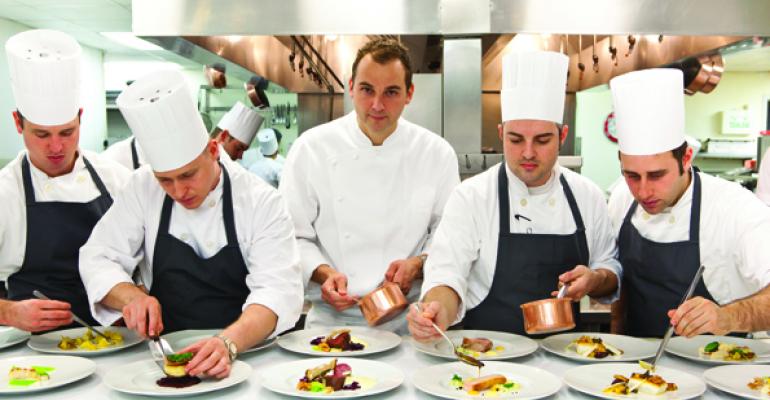 “I have to change to stay the same.”

So goes an idea expressed by Willem de Kooning, a  master abstract painter and visionary who did as much as anyone to change the methods and the meaning of modern art. He also, as it happens, served as something of a muse for Eleven Madison Park.

The late artist’s observation figures prominently in the presentation of Eleven Madison Park, which has made change part of its routine. Since opening in New York in 1998 under the original ownership of Danny Meyer, the restaurant has charted numerous courses on the way to its current iteration. It began as a traditional brasserie, later shifted into an exploratory form of fine dining and now integrates haute cuisine with a playful, street-smart sense of performance and theater.

Hence the connection to de Kooning, whose simultaneously wild and refined style of painting inspired Eleven Madison Park’s former general manager and current co-owner William Guidara when he worked at another of Meyer’s restaurants at the Museum of Modern Art. Likewise, the spirit of Miles Davis and his restless approach to remaking jazz over the course of his career inspired change at the restaurant at a pivotal time.

That was in 2006, shortly after Humm moved from San Francisco to New York to transform Meyer’s flagging restaurant from a brasserie to a destination for more distinctive fine dining. A review in The New York Observer from around that time expressed admiration for Humm’s cooking and the restaurant as a whole, but suggested the place was in need of an extra essential something — “a little Miles Davis.”

Humm and Guidara took the critique to heart. 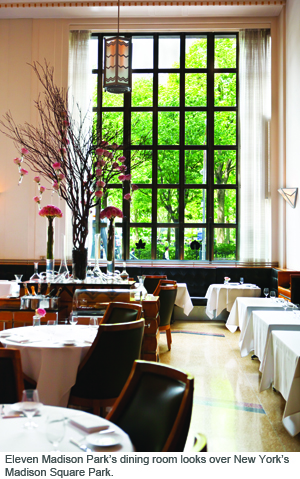 “Early on, we wanted to find language and things we could use to get better, so we researched Miles — his music, his career, his biographies,” Humm said. “We compiled a list of 11 words that were most commonly used to describe him, words like ‘reinvention,’ ‘forward moving,’ ‘collaborative,’ ‘vibrant,’ ‘innovative.’ ‘Cool,’ too, was a big one because fine-dining restaurants weren’t cool, were not places where young people would want to go. We started making that part of our mission statement.”

Three years later, Eleven Madison Park earned a rare four-star rave from The New York Times, identifying it as one of the city’s best restaurants. Then came the awarding of three Michelin stars, followed by more change, this time by way of a break with Meyer. He sold the restaurant to Humm and Guidara, who then embarked on their next stage of development.

“We got bored,” Humm said of the transition to their newest stage, which followed a radical reinvention of Eleven Madison Park that he and Guidara instituted last year. The change entailed removing the more traditional menu and replacing it with a sort of open-source tasting menu. They also introduced dishes concocted with their New York provenance in mind.

“One of the things we’re inspired to do right now is to create a restaurant at the highest level in New York that wouldn’t make sense anywhere else but in New York,” Guidara said.

Some of that has manifested in dishes like a Long Island chowder served over seaweed-streaked rocks to draw on the scent of the ocean. Other dishes rely on presentation, including a dessert preceded by a magic trick performed with a deck of cards tableside.

All of it has wowed diners and won the restaurant another descriptor from Moira Hodgson, the reviewer who recommended the restaurant employ “a little Miles Davis” years ago. That word: euphoric.