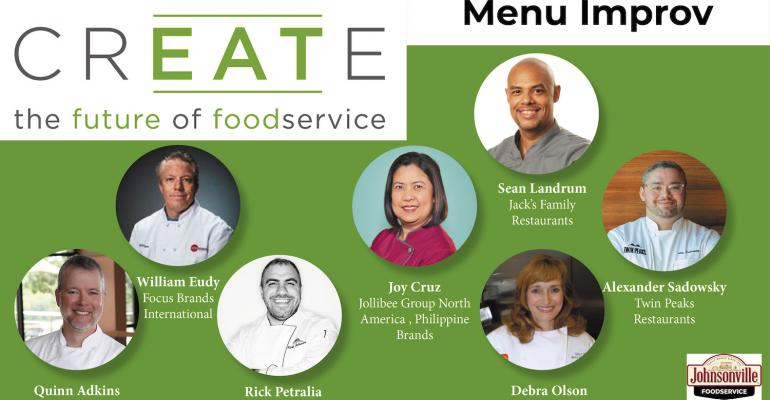 Menu development has been difficult during the pandemic, first with social distancing requirements and then with supply-chain disruption and labor shortages.

But seven corporate chefs at chain restaurants recently got together remotely for an idea-generating seminar called Menu Improv.

Recipe developer and cookbook author Stacey Ballis moderated the exercise sponsored by Johnsonville Foodservice, and the chefs came up with dozens of ideas for what to do with Johnsonville’s original sausage and chorizo strips, both of which were introduced to foodservice earlier this year.

The Menu Improv session was part of the year-long program CREATE: The Future of Foodservice, produced by Informa Connect’s Restaurant & Food Group, which culminates in an in-person conference in Denver Oct 4-6.

Starting simple, Ballis asked the participants to dream up dishes in which the strips could be substituted.

Debra Olson, director of culinary development for family-dining buffet chain Golden Corral, suggested wrapping the original sausage strip, instead of bacon, around chicken and then baking it.

Alex Sadowsky, director of culinary, beverage and menu Innovation for casual-dining Twin Peaks Restaurants, said he’d cut up either sausage and cook them with Southern-style greens.

William Eudy, corporate executive chef for the International division of multi-concept Focus Brands (including Moe’s Southwest Grill, Schlotzsky’s and McAlister’s Deli), said that using the chorizo strips in a classic would keep the meat from falling out of the sandwich.

Jennifer Joy Cruz, the R&D Head for quick-service Jollibee North America, said it would be good in quiche.

Rick Petralia, director of culinary innovation for fast-casual chain Fazoli’s, said he would wrap the chorizo around filet mignon.

Other suggestions included putting it in jalapeño poppers, jambalaya, wrapping it around asparagus, skewering it on a kebab, wrapping dates with it and cooking it instead of bacon down into a jam with onions, brown sugar and vinegar.

Next, chefs were asked to name three ingredients, a cooking technique and a cooking style and then one of them had to verbally improvise a dish from those suggestions — sort of a combination of improv and mystery-box competitions.

Olson suggested Texas toast cooked on a flattop with cotija cheese and the chorizo sausage strips, topped with lettuce.

Landrum described enchiladas with the chorizo, chicken and grilled onions

In an exercise called Finish the Story, in which one chef started a recipe and then two others had to complete it, Petralia concluded the task with a biscuit sandwich with candied sausage strips, green chile cream gravy, queso fresco and pickled onions with a side salad.

Next came a quick-fire challenge of menu items by daypart. The results were as follows.

And they went on to dessert, and came up with the following ideas,

And finally the chefs were challenged to collaborate on what Ballis called “Recipe Haiku”. However, although the three-line poems have a fixed number of syllables, in this case she just asked each chef to start a recipe and for the next two to finish.

In one such food poem, Petralia started by weaving original sausage strips together, which Cruz then baked into a crispy sheet and Landrum used them instead of a tortilla to make quesadillas stuffed with cheese and green chile.

In another, Eudy wrapped chorizo around large day boat scallops and sautéed them, Adkins put the scallops over toasted-corn grits with goat cheese, and Olson topped them with a roasted-corn Alfredo sauce.