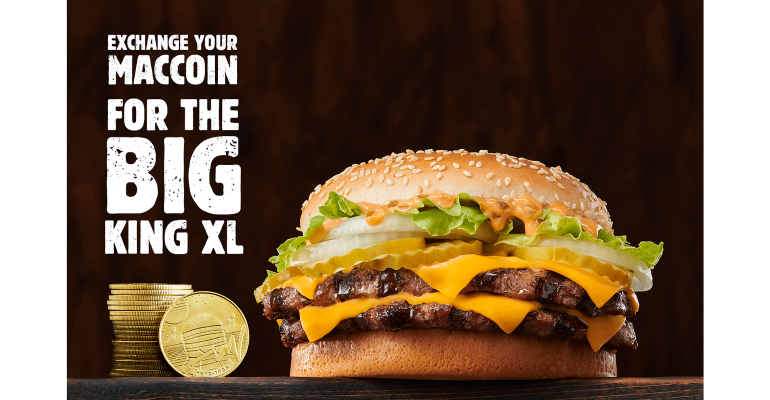 Burger King is trolling McDonald’s again with another marketing stunt aimed at one of the chain’s most iconic burgers: The Big Mac.

On Thursday, Burger King announced the debut of The Big King XL. The Miami-based burger chain, owned by Restaurant Brands International Inc., billed the “more than half-pound” flame-grilled burger as having “175 percent more beef than the Big Mac” and without the third bun.

“The Big King XL sandwich will make guests want to swap their bread for beef — literally,” Burger King said in a statement.

The burger was available nationwide starting Thursday for the suggested price of $5.59. However, Chicago-area residents might be able to get a free Big King if they are in possession of a limited-edition MacCoin.

Last summer, McDonald’s celebrated the 50th anniversary of the Big Mac by giving away 6.2 million MacCoins. Distribution of the commemorative coins started Aug. 2 with the purchase of a Big Mac. Collectors had until the end of 2018 to trade each coin, which came in five different designs, for a free Big Mac through the end of 2018.

“Now that the MacCoins have expired, Burger King is giving people one more day to use their MacCoins, but this time for the bigger, flame-grilled option,” the company said.

Select Burger King locations in Chicago, the corporate home of McDonald’s, are participating in the coin-for-burger trade on Jan. 18.

Burger King has a history of taking jabs at McDonald’s. The most recent publicity stunt was last month with the “Whopper Detour” campaign. The company encouraged customers to download the Burger King app within 600 feet of a McDonald’s restaurant. Using geofencing technology, the app would allow users to buy a Whopper for one penny while they were near the McDonald’s. Once the order was made, customers were then navigated to the nearest Burger King.