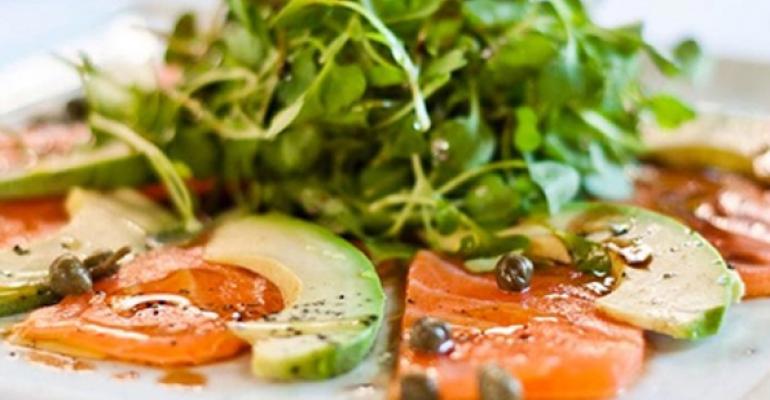 Avocado on trend, from appetizers to desserts

Avocado is in a sweet spot when it comes to food trends.

Unctuous, high in fat and, outside of Southern California, not inexpensive, the fruit appeals to consumers looking to treat themselves to a little indulgence. Conversely, since much of that fat is the heart-healthy monounsaturated kind, and avocados also are rich in other nutrients and antioxidants, it also appeals to people trying to look after their health.

As a result, and as a result of relaxed import controls, what once was a rare, seasonal luxury in most of the United States, has become a fairly commonplace ingredient, now even available as a premium option at quick service sandwich giant Subway.

And its popularity is spreading, according to growers collaborative Calavo, the main distributor of the fruit, which has seen a 165-percent increase in avocado consumption since 2000. That increase is accelerating, too: Calavo predicts an increase in consumption of more than 20 percent alone from 2011 to 2012, to 4.5 pounds per person.

Chain restaurants such as Au Bon Pain have included avocado on its most recent menus, and independents are finding new uses for it.

Avocado has long been popular at American sushi restaurants, where it’s a key ingredient, with crab and cucumber, in the California roll. At Yojisan, a new sushi restaurant in Beverly Hills, Calif., that custom continues. It appears in such items as salmon and avocado carpaccio with arugula, capers, balsamic ponzu, olive oil, black sea salt and yuzu, and in a Kobe beef taco with onion, shiitake mushroom and sake-soy sauce.

“Monkey brains” a fried-avocado preparation, is becoming more popular as a starter at Japanese restaurants in the United States, such as at Hapa in Denver. There, half an avocado is stuffed with crab salad and spicy tuna. It’s tempura fried, sliced and topped with sweet soy and spicy aioli.

Poggio, an Italian restaurant in Sausalito, Calif., serves it as an appetizer with house-cured lardo, pickled watermelon rind and walnuts.

At The Bazaar, Jose Andres’ Beverly Hills restaurant, avocado and ceviche made with whatever fish is fresh is served in a roll with jicama, micro cilantro and coconut.

Avocado is even finding its way into dessert, such as at Hudson House in Sausalito, Calif., which serves a bacon waffle cookie and coconut avocado ice cream sandwich.

At Seviche in Louisville, Ky., an avocado dessert was created to go with its “dinner and a movie” nights, at which chef-owner Anthony Lamas shows food related films during the meal.

Inspired by a biographical movie of Ferran Adria, Lamas decided to do his own culinary sleight of hand.

He used food grade silicone plastique to make a mold of an avocado half. Then he made an ice cream by mixing avocado with cream, sugar, salt and egg yolks. He spooned that into the mold and froze it. Then he used a melon ball to scoop out the center and fill it with dulce de leche. He put a chocolate bourbon caramel truffle, which he made to look like an avocado pit, on top. He then removed it from the mold and brushed it with tempered chocolate, to look like an avocado skin.

The item was so popular that he added it to his regular dessert menu. He pre-makes the dessert and stores it in the freezer. When one is ordered, he lets it thaw for about two minutes, quickly heats it with a blow torch so it glistens like a ripe avocado.