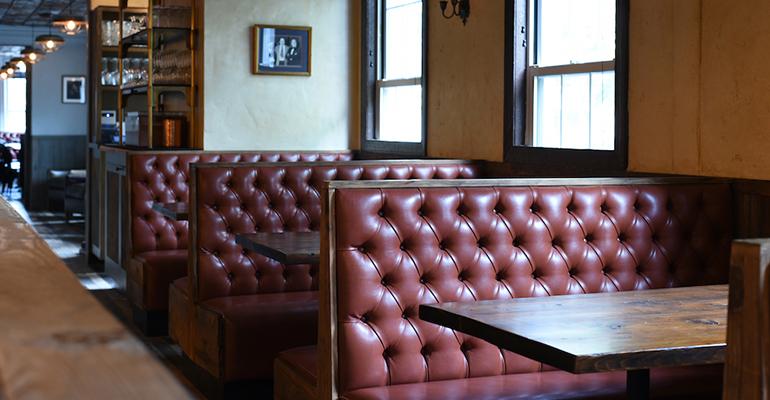 The 2nd Avenue Deli, one of New York City’s longest standing institutions for Jewish delicatessen, has gone into the bar business.

Opened in 1954 by Abe Lebewohl, the uncle of the current owners, brothers Jeremy and Josh Lebewohl, the original location was a landmark specializing in items such as chopped liver, gefilte fish, matzoh ball soup and blintzes.

It closed at the end of 2005 in the wake of a dispute with the restaurant’s landlord, much to the anguish of many New Yorkers, but the brothers reopened it on Third Avenue in Midtown Manhattan at the end of 2007. They then opened a second location, on First Avenue on the island’s Upper East Side, in 2011 (the Lebewohls’ running joke is that the two addresses still average out to Second Avenue).

At the end of November of this year, they opened The 2nd Floor over the Upper East Side location, offering beer, wine, craft cocktails and cheffed-up deli fare.

“We had the space on top of the restaurant and we had different ideas about how best to utilize the space,” Jeremy Lebewohl said. Eventually they decided that the neighborhood didn’t really have anything like it. They’re also not usually kosher, following Judaism’s complex dietary laws, nor do they have Jewish or biblically themed cocktails.

Beverage director Jason Jeffords worked with 2nd Floor’s bartenders to develop 18 cocktails, 18 being the luckiest number in Jewish tradition, including the Man-O-Manischewitz — made with London dry gin, mulled Manischewitz wine, lemon and cinnamon — The Sage and the Prophet — a blend of Chartreuse, sage, citrus and coconut water — and City of Gold (another name for Jerusalem) — made with Guyana Rum, the plum brandy Slivovitz, sherry, peach and lime.

Lebewohl said making the bar kosher proved not to be too difficult, since the restaurant below is already kosher, “and when it comes to spirits, there’s really no problem,” except for anything made with grapes, including wine and cognac, which is strictly regulated. So, except for a kosher Champagne, the wine is Israeli.

The Lebewohls hired a family friend, chef David Teyf, as executive chef for The 2nd Floor.

“I didn’t just want to have elevated pub food,” Lebewohl said. Nor did he want to serve the pastrami sandwiches and black cherry soda available downstairs.

“We have a rich history and David and I have quite a long friendship. He knows me and he knows my family,” Lebewohl said, adding that Teyf is also familiar with the Eastern European Jewish traditions that are the foundation of the deli’s cuisine.

Among the items are gefilte croquettes. It’s derived from gefilte fish, a dish of ground fish — often pike or carp — mixed with onions, celery, carrots, poached in fish broth and served during Passover, usually with horseradish.

“Instead of boiling it, we’re breading it, pan-frying it and then we inject the croquettes with a mixture of horseradish and beets, and garnish it with shaved horseradish. … It’s Passover in a perfectly fried ball,” Lebewohl said. Teyf also offers pastrami deviled eggs and franks in a blanket, made with grilled beef hot dogs wrapped in a dough that has some sauerkraut and baked beans massaged into it, and then sprinkled with everything bagel coating.

“David did a fantastic job of coming up with something that’s simple but really stands out.”

Among other menu items are duck confit blintzes with duck cracklings, tongue sliders, and a soup made from an Eastern European Jewish delicacy called p’tcha, or jellied calves feet.

Lebewohl grew up eating it cold, “as a Jell-O” with hard-boiled eggs. But at the 2nd Floor they serve it warm, so it’s basically a trendy bone broth.

“I love watching people eat it because if it were cold they would shudder,” Lebewohl said.

Other dishes are more specific to the Lebewohl family history.

“David is very sentimental, so a lot of the items on the menu have a little story behind them,” including the hickory smoked grapefruit flavored with pastrami spices, honey and single malt scotch, which is a nod to the Lebewohls’ grandfather, who always served grapefruit when guests visited. Lebewohl said both the cocktails and the food are selling well.

“People are curious to try everything,” he said.

“I didn’t know whether we were going to have people coming in and ordering scotch or beer or a glass of wine, but a really high percentage have been ordering our signature cocktails.”

Even those tongue sliders — served on little challah medallions with tomato, garlic, dill aïoli and pickled romaine — are moving.

“People are coming upstairs with a little bit of an adventurous spirit,” Lebewohl said.