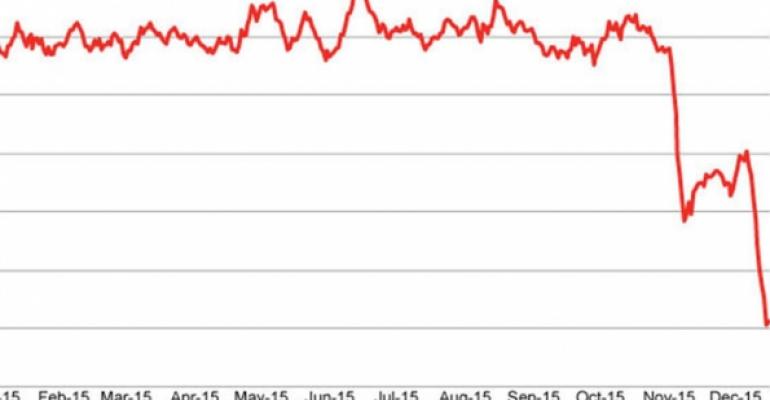 In fact, YouGov now says that the decline in Chipotle’s perception among the public rivals that of the decline in perception at General Motors last year, after the company was accused of covering up vehicle ignition switch failures.

Chipotle customers in nine states have been sickened with E. coli, according to the Centers for Disease Control and Prevention. And the chain was forced to close a location in Boston earlier this month after 140 people there were sickened in a norovirus outbreak.

The E. coli outbreak led to a steep decline in Chipotle’s perception, and the Boston outbreak made matters worse.

YouGov, a consumer perception research firm, has interviewed 25,000 adults since Jan. 1 for this research. It uses these interviews to compile “buzz scores” for numerous brands. The firm scores brands on a range from 100 to -100, with 0 being neutral.

The score continued to drop after the apology, and is now down to -40. According to YouGov, that’s equal to the 48-point drop in the perception at GM following its crisis.

The perception is measured by consumers’ responses to the question of whether they had heard anything positive or negative about a brand through advertising or word of mouth.

The decline in reputation is bad news for Chipotle. The Denver-based chain’s sales had been slowing due to tough comparisons this year, growing just 2.6 percent in the third quarter after rising well into the double digits for most of 2014.

The E. coli incident first appeared on Oct. 31. Chipotle said earlier this month that it expected same-store sales to fall in the range of 8 percent to 11 percent in the fourth quarter as a result of the outbreak. The company said that same-store sales fell 16 percent in November.

That was before norovirus sickened mostly Boston College students earlier this month. Ells went on the Today Show shortly thereafter and apologized.

Chipotle has also started a campaign to get back into consumers’ good graces in Boston. It took out full-page ads in Boston’s two daily newspapers, the Globe and the Herald, with Ells saying that the problems “have shown us that we need to do better, much better.”