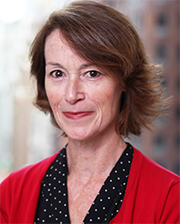 You have to feel a little sorry for Chipotle Mexican Grill Inc.

Even as Boston College officials raised the number of students to more than 140 that have been felled by norovirus after eating at a Chipotle in Boston, Steve Ells, the fast-casual chain’s chair, founder and co-CEO was on the Today show issuing his first televised apology as the company continues to grapple with ongoing reports of foodborne illness.

“I’m sorry for the people who got sick, they’re having a tough time and I feel terrible about that,” he said in the interview. “We’re doing a lot to rectify that so this won’t happen again.”

If there is a silver lining, Ells told Matt Lauer in the Today show interview, it’s that Chipotle is working with food-safety consultants to make their restaurants the safest place in the world to eat.

Still, health officials don’t know what the source of the E. coli outbreak was and they may never know. The ingredient was likely gone long before customers started showing symptoms, and that makes it difficult for the company to convey a message that whatever was wrong has been fixed.

Crisis management experts are not impressed with the way Chipotle is handling this crisis.

“I would give them a C,” said Laurel Kennedy, principal of crisis management firm Blink.

Ells’ emphasis on making Chipotle the safest place to eat sets a low bar, she said. “If that’s the best brand promise you can deliver consumers, that’s very sad.”

It was also vague at a time when consumers are looking for specifics. In the case of the Boston norovirus, for example, Ells said the restaurant is being sanitized and employees tested before they reopen.

“He needs to be super specific about what sanitizing a store involves, and what employee training is involved,” she said. The company should also be explaining in more detail the third-party certification it will be using to ensure the stricter protocols are being followed.

“They’re basically absent on social media, which is a huge mistake,” she said. “On Twitter, there’s page after page of negative coverage.”

The chain’s website has included updates on the E. coli outbreak, but nothing on the Boston norovirus as of Thursday midday, she noted, though that outbreak has been limited to one restaurant.

Health officials reportedly cited Chipotle on two violations at the restaurant: meat wasn’t being held at proper temperatures and an employee came to work when sick, contrary to company policy. The latter is a more likely cause of an outbreak of a highly contagious disease like norovirus, though health officials have not yet pinpointed the source.

Kennedy said it would be easy for consumers to get the message that Chipotle is spending a lot of money on its positioning about things like using no genetically modified ingredients, “but too bad they weren’t paying attention to basics like food safety,” she said.

With all the attention this issue is getting, it would be impossible for Chipotle to control what people are saying about the brand, she noted. “But they could shape it. They’re letting it run wild without any response.”

Jeff Nelken, a Woodland Hills, Calif.-based food-safety analyst, also wants to hear more said publicly from Chipotle about what the brand is doing to create a culture of food safety at each restaurant.

“I want to know what did they really do to improve the food safety in the four walls?” he said.

There is much room for improvement in the way fresh produce is handled generally — from farm to restaurant — and restaurant operators would do well to work more closely with suppliers to establish higher standards, Nelken said.

“But it looks like Chipotle is having more problems than other companies put together,” he said. “That’s telling you something is wrong with their food safety culture.”

That culture is something all restaurant operators should build into their operations from Day 1, Nelken said.

It appears Chipotle didn’t do that and is paying the price.

“It’s time to give that culture a kick in the pants and move into a higher realm of food safety,” Nelken said.

Some have used the outbreak to attack Chipotle’s use of fresh foods.

In Chipotle’s annual report, it notes among risks that the concept may be more susceptible than its competitors to foodborne illness because of its use of fresh foods and real cooking techniques, as opposed to the cooked-then-frozen products and automated processes used widely throughout the quick-service world for decades.

Cooking can kill pathogens, so, for any restaurant, fresh food has risks. But the demand for fresh ingredients is not going away.

Chipotle set out to redefine fast food, and they have. That emphasis on fresh ingredients and real cooking has won the brand a passionate cult following.

Now Chipotle faces the challenge of demonstrating to the world whether its new model for fast food can include food safety as a priority as the company moves beyond the 2,000-unit mark.