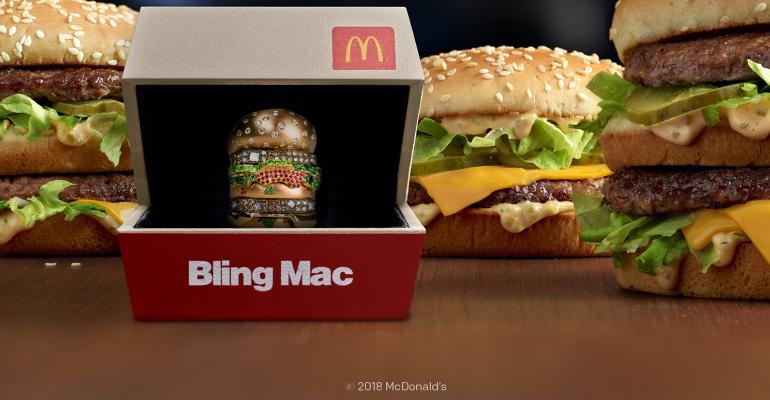 To sweeten the limited-time offer as Valentine’s Day approaches, McDonald’s is giving away a bejeweled 18-karat stackable ring with seven tiers of diamonds and other gems, including orange sapphires to resemble the Big Mac’s special sauce.

“One dedicated fan will have the chance to win this unique piece created by fine-jewelry designer Nadine Goshn,” a McDonald’s spokesperson said.

To enter, fans can express their adoration for the sandwiches on Twitter through Feb. 14, using the hashtag #BlingMacContest and tagging @McDonalds.

“The Bling Mac will be awarded to the most witty, comedic and romantic tweet,” the spokesperson said.

The new Mac Jr. is a single-layer Big Mac, which the company has said is easier to eat on the go. The Grand Mac is a larger version of the original Big Mac, offering two all-beef patties that weigh a combined one-third pound.

The trio of Big Macs was rolled out Florida and Pittsburgh, Pa., in November after tests in central Ohio and the Dallas/Fort Worth area, and introduced nationwide earlier this year.

The Big Mac was first introduced by Pennsylvania franchisee Jim Delligatti in 1967 and offered nationally in 1968.