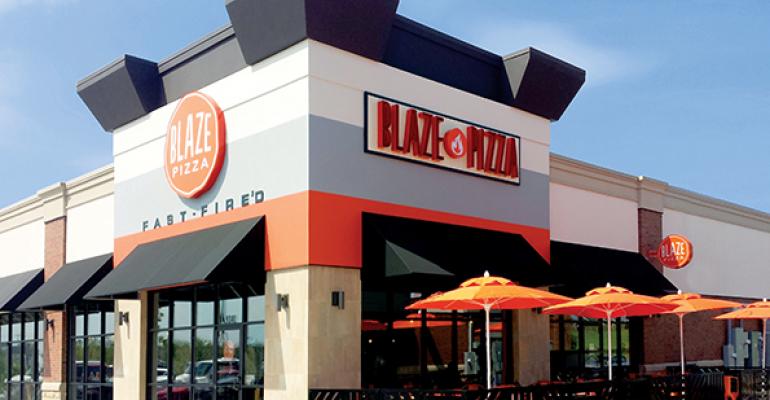 LeBron James's 2015 bet on Blaze Pizza is paying off

Blog: NBA star gave up $14 million a year from McDonald’s to “build something” with the growing chain

In 2015, NBA star LeBron James opted out of an endorsement contract with McDonald’s Corp., which would have paid him more than $14 million a year to market the chain’s products.

Instead, he opted to be the voice of Blaze Fast-Fire'd Pizza, a little known but rapidly growing fast-casual chain based in Pasadena, Calif.

It was a risk at the time. While Blaze Pizza was already one of the fastest-growing restaurant chains in the country, it was still a fraction of the size of McDonald’s and operates in a relatively unproven sector with tons of new competitors.

But James's bet is paying off.

In an interview this week with the digital media company Uninterrupted, James explained why he chose Blaze Pizza over McDonald’s in a typically diplomatic fashion: Not by bashing McDonald’s, but because the opportunity with the pizza chain was better.

“I had a great partnership with McDonald’s,” James said in the interview with his business manager, Maverick Carter. “We did some great things on television, great things over the years. But I went to UC Irvine, to the first [Blaze Pizza] location. I tasted the product — the product was phenomenal. I took a pie back to the hotel.”

James was an early Blaze Pizza investor in 2012, when the chain had just a couple of locations.

But his move in 2015 represented something more. Carter approached James with a business proposition, he said, showing that being a franchisee for Blaze Pizza would be worth more than a McDonald’s contract over four years. Carter ultimately worked out a deal with Larry Levy of Levy Family Partners to operate Blaze Pizza locations in South Florida and Chicago, according to Forbes.

“The numbers you were showing me — the potential we could make if we just put in the time and effort — exceeded what McDonald’s would guarantee me over the next four years,” James said.

He also liked the potential of pizza.

Athletes are becoming more sophisticated in their investments in recent years, and more of them have been turning to restaurants. Many are taking deals beyond simple endorsements to get involved in the company, either as franchisees, or owners, or, in James’s case, both.

Dozens of current and former athletes are franchisees of various chains. Many athletes step up to become spokesmen for the brands, as former NFL quarterback Peyton Manning has done with Papa John’s International Inc.

Restaurants are cash businesses, and large-scale franchises can be relatively safe investments. Athletes make a lot of money in a short period of time, so putting some of the money into restaurants could help them build on that wealth for their post-playing careers.

And more athletes are opting for equity deals with brands. In 2014, for instance, NBA player Kevin Durant reached such a deal with the Oklahoma City-based chain Orange Leaf Frozen Yogurt.

For Blaze Pizza, of course, the deal is an absolute no-brainer. James is a wealthy franchisee who can help fund the development of many locations in key markets, along with an experienced restaurateur in Levy.

More to the point, James gives Blaze Pizza an important tool in the cutthroat race to become the biggest player in the growing fast-casual pizza segment, with MOD Pizza, Pieology, PizzaRev, Pie Five and others. James routinely makes comments about Blaze Pizza on social media and in other formats. That’s free advertising.

“100 million people know about us because LeBron can do a better job than the press,” Blaze Pizza CEO Jim Mizes said earlier this year, referring to a tweet by James about Blaze Pizza after he ordered online. “All of a sudden, it’s national news.”

As for James, he’s making money as a franchisee. And, as an early investor, he gets the benefit of having a piece of one of the fastest-growing restaurant chains in the country. Blaze Pizza’s immense unit growth has helped the chain’s system sales grow 500 percent in just two years, according to NRN Second 100 data.

“Forget the money,” James said. “We could actually build something. If it doesn’t become successful, I could only blame myself. The product tastes that good.”