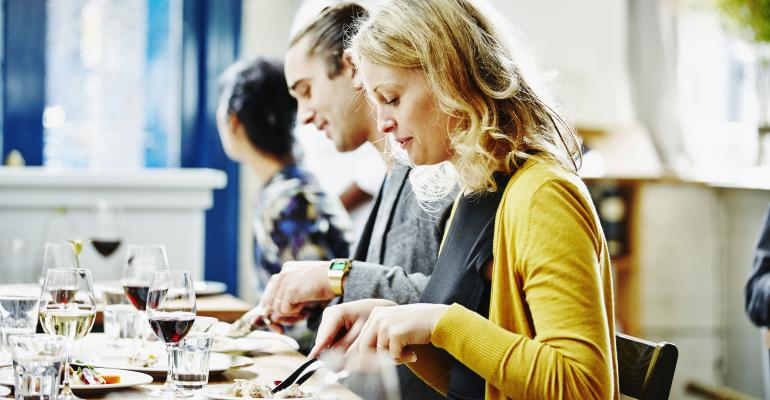 Rather than reviews by famed critics, everyday people are going into restaurants and giving their own opinions and getting millions of views.
Marketing

How TikTok is changing the restaurant landscape

From restaurant reviews to discovery, it’s become the new platform for consumers to uncover where to go next

TikTok is no longer new. In fact, Nation’s Restaurant News wrote a piece in 2019 about how restaurants needed to pay attention to the social media platform for marketing and messaging purposes. Less than three years later, TikTok has become commonplace for chains and independent restaurants. You’re behind the times if you’re not on TikTok.

We’ve seen the trends on TikTok with people commenting on the way food is prepared, with chefs like Gordon Ramsay getting in on the trend  and millions of views. But the latest trend is garnering a lot of attention: Scathing restaurant reviews by “normal,” non-famous people.

Rather than reviews by famed critics, everyday people are going into restaurants and giving their own opinions and getting millions of views. Take this video by The VIP List, a pair of 24-year-olds who review restaurants, call their fans “peasants” and make fun of the techniques chefs have perfected after years in culinary school and practice.

Meg Radice and Audrey Jongens, the pair behind the account, recently posted a video called “Is Pastis Worth the Hype?” It begins with a voiceover saying, “Let’s get this over with, this might actually be the worst dessert we’ve ever had,” referring to one from the famed Michelin-starred French restaurant in New York City. The review does end with a recommendation from the women.

Other The VIP List videos of restaurants such as Altro Paridiso, Lure Fish Bar, L’Artusi and more don’t receive the same negative treatment.

With hundreds of thousands of views on each video, the women have garnered a fan base and started their own company based on their reviews. None of their content is tagged as sponsored, but that doesn’t mean it wasn’t gifted by the restaurant in hopes of a favorable review or content.

That’s one place where they differ from traditional restaurant reviewers. There is no telling what they got for free or what they’re giving a favorable review as a result. TikTok is still unregulated and it’s the wild, wild west out there.

Another trend? Discovery on TikTok.

Main and main isn’t as important anymore when it comes to restaurant location. Now it’s about your location online, and whether you can be discovered there. Are the right people going to your restaurant and making videos about it? If not, you’re going to have to invest more in your own marketing budget versus the organic marketing that comes from places like TikTok discovery.

According to MGH, a marketing and communication agency, 53% of Millennial TikTok users have visited a restaurant and/or ordered food from it after seeing it on TikTok.

Additionally, 38% of TikTok users across all generations — approximately 51.8 million diners — have visited a restaurant or ordered food from it after seeing a TikTok video about it.

The MGH survey also found that TikTok videos have prompted users to travel longer distances for new dining experiences, as well as swayed them to spend more money than they usually would on restaurants. Of the TikTok users surveyed, 30% have traveled longer than they normally do to visit a restaurant after seeing it on TikTok, and 28% have visited a restaurant that was slightly more expensive than the ones they usually visit after seeing it on TikTok.

“What this survey shows is that this once-dismissed social network, TikTok, has completely changed the way people behave, where they spend their time, and more importantly, how they spend their money,” said Ryan Goff, EVP, social media marketing director at MGH. “TikTok truly is a restaurant marketer’s dream come true. There aren’t many other tools we have left in our marketing toolbox that can drive the sort of impact promised by TikTok through this survey.”

Seventy-two percent of users surveyed said that they went to a specific restaurant because it had “appetizing-looking food,” while 45% said it was a unique menu item that drew them in. We know the power of a new menu item over at Restaurant Hospitality, we run a weekly column about them called New on the Menu that features new menu items. It’s maintained popularity among readers for years. It’s the same with NRN’s Menu Tracker: People want to experience the new and exciting, and TikTok is a great way to show that off.

Take Taco Bell, for example. A brand that doesn’t need help on social media or with discoverability, but it shows off its new menu items on TikTok all the time to great success.

The return of the Mexican Pizza was the chain’s biggest debut on TikTok, with 57 million views. They debuted their new Loaded Truff Nacho Fries on the app as well.

Restaurant tours like this one are great for discoverability and hit on all the points in the survey, showing off new food and an inviting atmosphere. That video has over 800,000 views. Indies can participate in the trend too.

Thirty-seven percent of consumers surveyed said they would go to a restaurant because it had a “cool atmosphere.”

The moral of the story is, post on social media and hope for the best. You may get a bad review, but you also may get discovered by the right person.