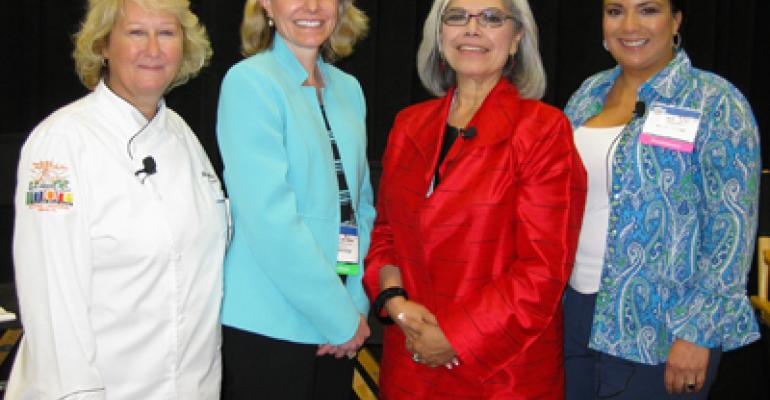 The hospitality industry has grown beyond being the man’s world of the last century, with women now mentoring and motivating the next generation of leaders.

The number of women-owned restaurants has increased 28 percent over the past five years, moderator Robin Lee Allen, executive editor of Nation’s Restaurant News, told a panel at the 2012 Southwest Foodservice Expo in Dallas. She added that 58 percent of the first-line supervisors and managers are women.

“Now those are wonderful statistics,” Allen said. “They show progress. But if you look higher up into the management ranks, you find that is not the case. In fact, only 35 women are CEOs in the Fortune 1000 companies.”

Women now own 35 percent of start-up businesses, Allen added, and by the end of the decade, they are projected to open more businesses than men. However, women still only earn 77 cents for every dollar that men earn, she noted.

Puente, whose company includes a collection of retail, food and beverage and travel companies, said she grew up in “an entrepreneur boot camp” with her family business. She created La Bodega Winery for airport locations in 1996 and joined her father in number of quick-service restaurants.

“The common denominator among all the business is customer service,” she said. “That’s what my dad taught me.” Puente is currently working with Dallas chef Stephan Pyles on a Sky King wine bar for the Dallas-Fort Worth International Airport, which is to open in the fall and another planed for Dallas’ Love Field.

“Twenty years ago, there seemed to be fewer opportunities for females,” she noted. “There was a competitive nature that didn’t foster a lot of support. That’s changed a lot over the past seven or eight years. Women understand that all ships rise.”

Networking among women has increased as well, according to Puente. “We try to encourage and foster innovative thinking,” she said. “Innovation and change is something you have to make people feel comfortable with.”

Van Meter, president of SVM Productions of Dallas, a television and radio culinary production company, recalled that when she started at Le Cordon Bleu in Paris in 1974, she was the only female among 573 students. “That was really, really an obstacle,” she said. “I just stood my ground, and said, ‘I’ll excel at this program.’”

Now she relies on encouraging others in her company. “You encourage the person who’s in charge of a part of your company to do their very best,” Van Meter said. “It really is all about team building. It’s not male or female.”

The hospitality industry is “a good career to be in as a woman,” Van Meter said. “It’s very flexible. You can be working days. You can work nights. You can switch with your husband so you both can take care of your family.”

Estella Martinez, an owner and co-founder of Matt’s Rancho Martinez restaurants in Austin and Dallas, said the board of her restaurant company is made up of four women. “We are a good example of women working together for continued success,” Martinez said. “Women are a lot more confident that they used and to be. I think the opportunities are more available. I hope our company is one that doesn’t base a position on gender.”