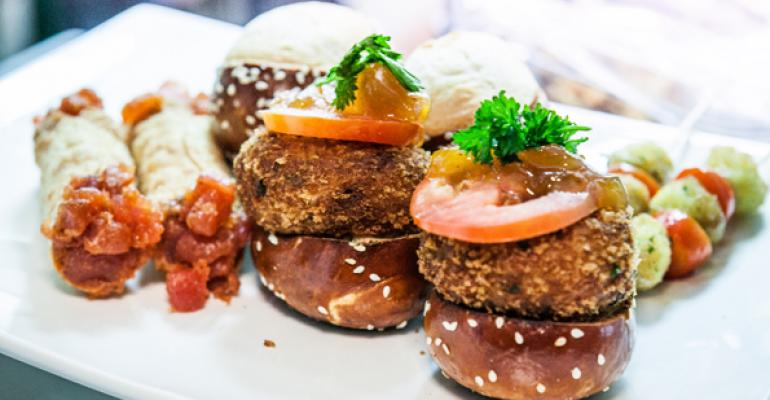 Venues with foodservice elements, from casinos to ballparks to schools, are treating their guests to a widening array of varied and delicious menu offerings. Largely absent from that culinary revolution, though, have been comedy clubs, which have remained bastions of two-drink minimums and food that, if it’s served at all, often seems as though it hasn't been modified since the 1980s.

Brothers Paul and Chris Italia and their business partner, David Kimowitz, are trying to change that with The Stand, a new club and restaurant in New York City’s Gramercy Park neighborhood.

Veteran comedy promoters, the partners had no trouble booking acts for the stage in the 80-seat room downstairs, which after a month had shows seven nights a week. But, "When we opened… we realized that for a five- to 10- block radius, there was a dining deficit,” Paul Italia said. So the partners decided to bring the dining scene to the patrons of the comedy club.

For the restaurant and bar upstairs, they hired chef Seth Levine, who is also chef of three other Manhattan restaurants — Sons of Essex, Wine and Roses, and RSVP Soho — as well as Georgica in Wainscott, N.Y., to develop the menu. The result is a selection of cheeseburgers and fish and chips, but also Peking duck pizzette, tuna tartare cannoli, and a modified caprese salad with fried mozzarella. They also recently added lighter items, including chicken paillard, three salads, and a vegan pesto portobello burger. 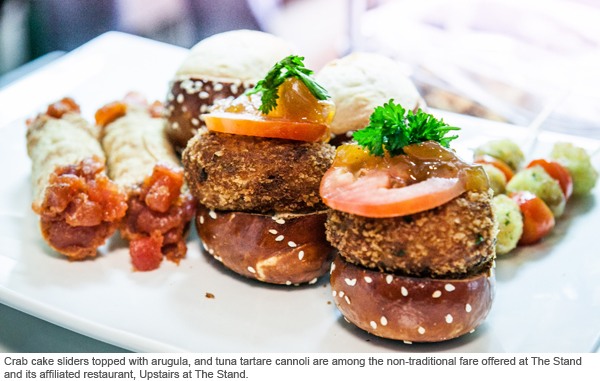 Mark Noonan and Cameron Dale of Minetta Tavern, owned by restaurant impresario Keith McNally, were commissioned to develop the cocktails. Drinks include standards such as the Negroni and the Old Fashioned, but also signature items, some named after comedians. The Dice, named after Andrew Dice Clay, is made with local gin, freshly squeezed grapefruit juice, agave syrup and an Italian amaro. The Boozler, named for Elayne Boosler, is made with gin, ginger liqueur, pear purée and muddled tarragon.

Cocktails are $13 apiece, although one cocktail is available during happy hour for $7. The average per person check at Upstairs at The Stand ranges from $35 to $42.50, Paul Italia said. 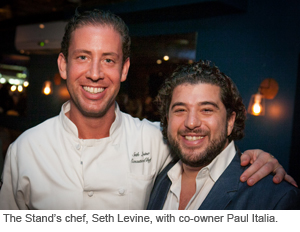 Although the club doesn’t have a two-drink minimum — “we want to promote the fact that you can have a bottle of wine,” Italia said — customers on average order two drinks anyway.

He said business has been decent, with 30 to 40 guests at shows during the week. The restaurant space has been bought out for birthdays, and two or three holiday parties are already on the books.

Italia said booking comedy acts didn’t prepare him for the restaurant business at all.

“It never ends. There’s always something to do,” he said. “And we’re on stage now. That’s the difference.”

Correction: November 21, 2012 An earlier version of this story misstated the role of chef Seth Levine. He is still chef at Sons of Essex, as well as four other restaurants. Additionally, his name was incorrect in an image caption; that has also been corrected.