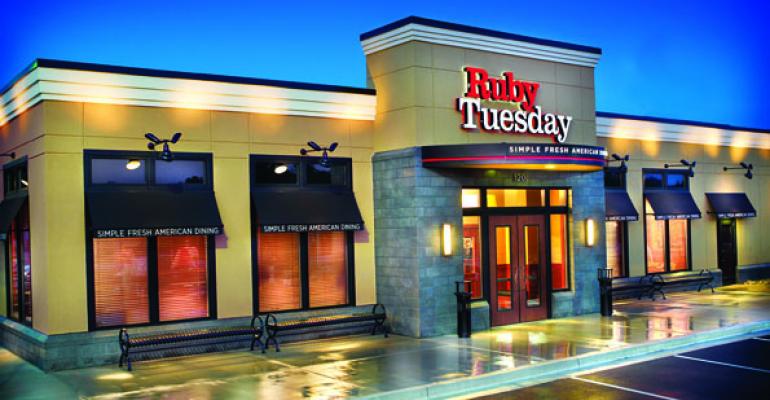 Ruby Tuesday to focus on casual after 'disappointing' 3Q

Brand to back away from polished-casual branding, revisit heritage

Ruby Tuesday Inc. will shift its focus back to its casual-dining roots following a disappointing third quarter.

Chief executive James J. “JJ” Buettgen said he was "disappointed" with third-quarter same-store sales, which dropped 2.8 percent at company-owned Ruby Tuesday restaurants and 1.7 percent at domestic franchise locations. He pointed to declining consumer sentiment due to the payroll tax increase, delayed processing of tax returns and bad weather as reasons for the decrease.

“Over the last few years, as changes were made to position the brand away from the bar and grill segment and more towards the higher-end polished casual segment of the category, the brand may have moved a bit too far from its heritage and core guest base,” he said. “I believe repositioning out of the bar and grill competitive set several years ago was the correct decision…. However, in our pursuit of a more upscale brand positioning we may have unintentionally overshot the runway.”

As such, he said, the company will shift toward a more casual and approachable brand positioning in order to appeal to a broader base of consumers. The idea is to make Ruby Tuesday a destination for a wider variety of dining occasions, he said, including drinks with friends, family dinners or date nights.

During the recession, then-chief executive Sandy Beall made it his mission to move his brand upscale, upgrading Ruby Tuesday’s décor and menu to appeal to a more affluent consumer. As recently as September 2010, Beall touted the company’s repositioning as a growth strategy for the brand.

Beall, who founded Ruby Tuesday in 1972, stepped down from the chief executive post last year, and Buettgen, formerly chief marketing officer at Darden Restaurants Inc., took over the role on Dec. 1, 2012.

A time of transition

The company reported revenue of $307.4 million during the quarter, down from $320.7 million the prior year.

The company closed all of its Marlin & Ray’s, Truffles Grill and Wok Hay locations during the third quarter in an effort to refocus the company on its core brand: Ruby Tuesday. Costs related to the closures negatively impacted revenue and net income figures, the company said in its earnings report.

“We are aware that this is significantly lower than prior results…and much lower than where we should be as an operating company,” Buettgen said of the earnings. “We are focused on improving our profitability and getting the brand in a position where it can realize consistent EPS growth on a year-over-year basis.”

Managing director Bryan C. Elliott and senior research associate Brian M. Vaccaro, both of financial services firm Raymond James & Associates, said that although the third-quarter results were a slight disappointment, they are hopeful Ruby Tuesday’s menu and marketing changes will turn the brand in a positive direction.

“If this sustains and new management’s broader repositioning efforts prove successful, we see significant upside in the company’s sales and profitability metrics from currently depressed levels,” Elliott and Vaccaro said in their report.

The company said that for the full year, it expects same-store sales will be flat at Ruby Tuesday, with earnings per share from continuing operations between $0.18 and $0.20.  Ruby Tuesday expects to open a net of between six and seven Lime Fresh restaurants — the company’s fast-casual concept — and plans to close six or seven company-owned Ruby Tuesday locations during the year.