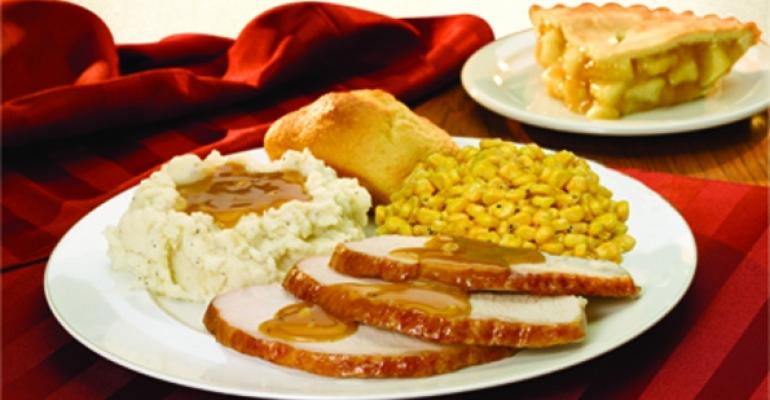 The Thanksgiving feast is traditionally a celebration of home cooking, but restaurant chains are fighting to claim a bigger place at the American holiday table.

The National Restaurant Association estimates that about 14 million consumers will visit a restaurant for Thanksgiving this year, and another 16 million will take out some or all of the meal that day. Those estimates were generated last year, but NRA officials said the trends are not expected to change.

Eating in restaurants or bringing in takeout on Thanksgiving is “becoming part of the collective consciousness,” said Sara Bittorf, chief brand officer for Boston Market. “The holiday is not about the food you eat as much as getting together with family and friends. We feel like our mission is to help simplify life for our guests.”

That increasing consumer acceptance of restaurant meals for holidays, restaurant operators say, is translating to big sales around the holidays.

Last year, Cracker Barrel reported that Thanksgiving Day sales were the highest of any day in company history, though the chain did not reveal exact numbers. Luby’s Inc. also reported a significant increase starting the week before Thanksgiving last year, when the chain saw an additional $1.4 million in cafeteria sales as customers ordered and picked up holiday “Feasts To Go,” according to company filings.

At Boston Market, another chain that offers a full takeout feast as well as dine-in options, reported that last year’s sales on Thanksgiving day increased 13 percent overall. The chain sold more than 1 million pounds of turkey, 2.6 million pounds of mashed potatoes, 639,000 pounds of stuffing and 180,000 gallons of gravy, the Golden, Colo.-based company said.

“We have been on a really positive trajectory. We’ve seen our holiday business growing every year,” said Bittorf. This year, the company is projecting a sales increase of 10 percent for dine in and 15 percent for takeout on Thanksgiving Day.

Catering bookings for Thanksgiving got a late start this year, which Bittorf blamed on the election and Hurricane Sandy. But this week, the chain saw record orders after sending out an email blast reminding customers that the holiday will soon be upon us.

Chains get creative with traditional dishes

While most Thanksgiving Day offerings include traditional dishes, some chains step out of the norm as they compete for consumers' business.

Columbus, Ohio-based Max & Erma’s is not only open on Thanksgiving day, but the chain is also promoting a late night “fun-funky experience” after 9 p.m., when friends and family can gather for beer, trivia games and “frozen turkey bowling.”

And Popeye’s Louisiana Kitchen takes the holiday's main course to a new level with its Cajun Turkey, a 9- to 11-pound whole flash-fried turkey infused with Cajun seasonings, available at participating stores through December. The offering is a popular one, but Kelsey Schmitt, a chain spokeswoman, said it’s difficult to gauge exact sales of the Cajun Turkey because many franchisees buy the frozen turkeys to donate or give as gifts to employees during the holidays.

Recognizing that many people still view Thanksgiving as a day reserved for home cooking, restaurants are also offering customers recipes incorporate takeout dishes as ingredients so home cooks can still say they prepared the meal. There are many consumers who would like a little help on Thanksgiving, noted Boston Market's Bittorf, “but they still want to make a dish their own.”

Boston Market this year launched a “Holiday Hub” website that offers tips for hosting a stress-free celebration and recipes, some of which that use the chain’s dishes. The chain’s creamed spinach side dish can be stuffed into Portobello mushroom caps with panko breadcrumbs and Parmesan for an appetizer, for example, and the sweet potato casserole can be turned into a cheesecake.

And Popeye’s is promoting a recipe for crawfish stuffing and Cajun gravy, which uses the chain’s crawfish, available as a limited-time offer through next week.

Chains are also varying the size of their takeout feasts. Bob Evans Farms, for example, is offering a feast to serve four for $44.99 this year in addition to its traditional Farmhouse Feast for $74.99, which serves eight.