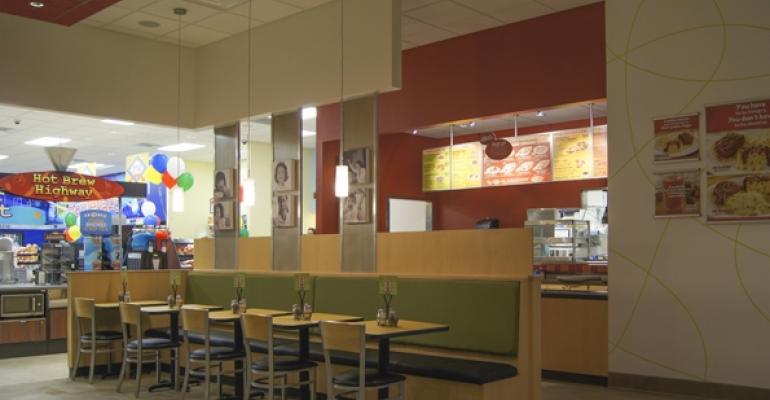 Checkers Drive-In, Fazoli&rsquo;s and Huddle House are optimistic on the potential of nontraditional restaurant locations.

Since typical real estate opportunities are at a premium, development executives for some restaurant franchisors are investing in nontraditional partnerships with retailers, convenience stores and travel centers to drive growth in 2013.

Checkers Drive-In, Fazoli’s and Huddle House officials disclosed plans to pursue growth of their standard restaurant footprints this year, but they also expressed optimism that nontraditional expansion would let them reach more customers and better serve their franchisees.

For example, this year Checkers opened two slimmed-down units in Walmart stores, including a franchised location at a new Super Walmart in Haymarket, Va., and a company-owned unit that replaced a McDonald’s restaurant in a Walmart in Oldsmar, Fla. The company is exploring many more Walmart locations for 488-unit Checkers and sibling brand Rally’s, which has 290 locations, next year.

Jennifer Durham, vice president of franchise development for Checkers and Rally’s, said that restaurant operators need to consider the right fit when opening an onsite store within another retailer’s box. “It has to be the right type of partnership,” she said. “With Checkers and Rally’s being the most value-relevant brands in QSR and Walmart being the most value-relevant retailer, it made sense to join forces. We wouldn’t go into a Nieman-Marcus, because that’s not where our consumers live.” 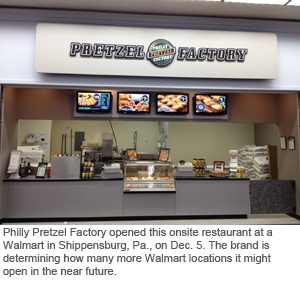 Walmart and other big-box retailers like Target long have opened franchised units of large quick-service chains like McDonald’s, Subway and Starbucks within their stores, and more rapidly expanding restaurant brands are getting into the game. In addition to Checkers, Philly Pretzel Factory also opened its first Walmart location this year, though officials have not yet determined how many nontraditional units will open in 2013.

Caribou Coffee signed a multilocation deal this year with Jewel-Osco , the largest chain of grocery stores in the Chicago market. Officials said during a recent earnings call that on-site restaurants in the grocery stores should reinforce sales of 610-unit Caribou’s packaged coffee in the aisles of Jewel.

“That’s really helping us expand,” he said. “We may not have been able to do that without the help of Pilot.” 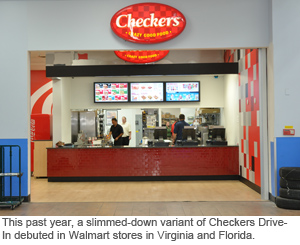 Huddle House remains an enthusiastic partner with Pilot because the company is reinvesting in its travel centers and upgrading the facilities to be a destination for travelers, Kendrick said. If more people take to the road in 2013 as they are projected to do then Huddle House stands to benefit, he said.

“As the economy improves, there’s going to be more and more commerce, especially with professional drivers going back and forth across the country,” he said. “We want to partner with the leaders of the travel industry, and the fact that Pilot is putting so much capital into these locations — who wouldn’t want to get that exposure in a fully upgraded center?”

Craig Sherwood, vice president of franchise development for Fazoli’s, agreed, saying that convenience store operators tell him constantly that they need popular restaurant brands in their buildings because the C-store industry is so competitive.

“If gas prices are the same as the guy across the street, what differentiates C-stores are the offerings inside,” Sherwood said. “The opportunity for us to differentiate a convenience store with our offering, as opposed to typical sandwiches, is we can really go after that meal replacement piece that’s becoming more important.”

The chain of 220 quick-service Italian restaurants opened its second travel center restaurant this month, partnering with multibrand franchisee Chintu Patel to put a Fazoli’s into a new station off Interstate 74 in Shelbyville, Ind., 25 miles outside Indianapolis.

Thus far, there is less demand from current Fazoli’s operators wanting to explore nontraditional locations than from the convenience store chains themselves wanting to become franchisees, Sherwood said. He added that Fazoli’s plans to open four more convenience store or travel center locations next year, and depending upon permitting and negotiations for other deals, could open as many as eight.

Meanwhile, Checkers and Rally’s operators are interested in rounding out their portfolios with Walmart locations, Durham said.

“I’ve got a lot of existing franchisees banging on the door saying, ‘Tell me when the next Walmart opportunity is opening up in my market,’” she said. “They can take their organization infrastructure and add a unit without too significant a cost.”

She could not disclose exact figures because the Walmart locations’ typical build-out costs are not yet part of Checkers’ franchise disclosure document, but she characterized it as “significantly lower” than the average $500,000 cost to build a standard Checkers or Rally’s.

This fiscal year, Huddle House will open another six locations with Pilot, with deals for 11 more such units in five states. Beyond Pilot, other travel center and convenience store chains have contacted Huddle House to possibly become franchisees, Kendrick said, which boosts the chain’s development numbers. Existing Huddle House franchisees also have expressed interest in travel center opportunities, he added. 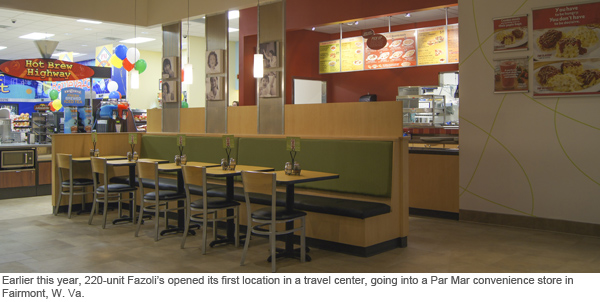 “It’s such a good marriage of our 24-hour business and their 24-hour business, plus our quality and variety of food offerings,” Kendrick said. “Our tagline of ‘Any meal, any time’ is also such a big plus for [travel center] partners.”

Fazoli’s first C-store location, which opened earlier this year at a Par Mar in Fairmont, W. Va., is performing well, Sherwood said, adding that greater potential could be unlocked after Fazoli’s figures out the best way to market that unit.

“People on the highway understand it, but our marketing challenge has been educating the local population that you can get a great meal at a gas station,” he said. “It’s a great environment with nice décor, and the catering business has really picked up from that location. We need people to get the idea that they could have a family dinner at a gas station and not have it feel like a gas station.”

Durham said the convenience and locations of Walmarts are driving acceptance of the Checkers stores people find within them. An important task for the brand, known for its speed of service at the drive-thru, is to import the efficiencies it has developed in its traditional locations to whatever new, nontraditional opportunities arise.

“Instead of being a double-drive-thru brand, we’re evolving into a convenient brand,” Durham said. “There are places with very captive audiences where you can’t do a drive-thru, like midtown Manhattan or the Atlanta airport, but now we’re leveraging all our learnings from the drive-thrus to new formats.”