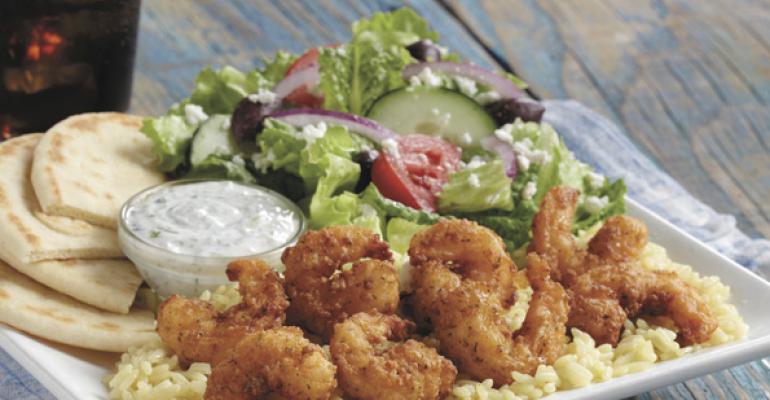 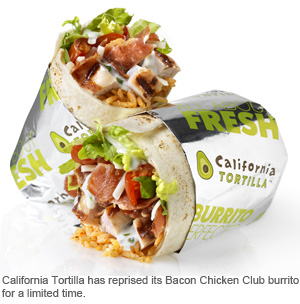 California Tortilla is bringing back its popular Bacon Chicken Club burrito, first introduced in 2009, for a limited time.

Made with grilled chicken breast, Monterey Jack cheese, bacon, jalapeño ranch dressing, Roma tomatoes, romaine lettuce and rice, wrapped in a soft corn tortilla, it’s available at all 38 locations of the Rockville, Md.-based fast-casual chain. The item is priced at $6.19 for a small wrap and $6.99 for a large one.

A company spokeswoman said an end date for the LTO had not yet been determined.

Sofritas is made with shredded organic tofu from a producer in Oakland, Calif., that's braised with chipotle, roasted poblano peppers and other spices. The item will be offered as a filling in burritos, tacos, burrito bowls and salads at select Chipotle locations in San Francisco, San Mateo, Palo Alto and Millbrae, Calif.

A spokeswoman said Sofritas would be priced similarly to chicken.

The Denver-based fast-casual chain said in a release that it was not satisfied with a vegetarian option called Garden Blend that it had previously tested, adding that, depending on the results of the Bay Area test, it might look to expand the offering of Sofritas to other markets in its 1,225-unit system “in the coming months.”

Cousins Subs has added two hot items to its winter menu and a new bread choice to go with them. 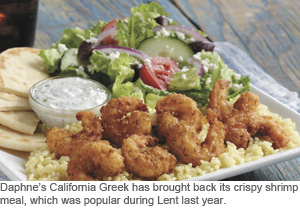 The Milwaukee-based chain is offering the subs systemwide through March 24. Prices vary by location.

Daphne’s California Greek is bringing back its Crispy Shrimp Meal Deal, first introduced at this time last year, for Lent. The $7.99 meal includes two skewers of crispy shrimp, for a total of about six shrimp, regular or multigrain pita, and the guest’s choice of two sides and a fountain drink. It’s available at all 55 units of the Carlsbad, Calif.-based chain through the end of March.

Mazzio’s Italian Eatery, a 153-unit chain based in Tulsa, Okla., has joined the growing number of restaurants offering food bowls.

The new Italian bowl is made with a choice of chicken, steak or vegetables and contains mushrooms, caramelized onions, roasted red peppers, tomatoes and basil on Arborio rice. It’s drizzled with sweet chile sauce and creamy garlic sauce. The veggie bowl costs $5.75, the chicken bowl is $6.25 and the steak bowl is $7. 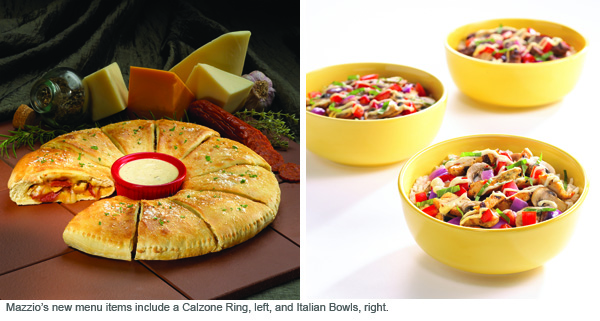 The new items are all available through April.

The Champion Pasta is chicken breast and turkey meatballs with reduced-fat mozzarella and marinara sauce over whole wheat penne pasta.

The Tucson is grilled chicken breast and turkey bacon over brown rice with tomatoes, scallions and zero-carb sauce.

All items are $5.99 and are available systemwide as permanent additions to the menu of the Colonia, N.J-based brand.

Panda Express has introduced a new premium item available at all of its nearly 1,600 locations in celebration of Chinese New Year and in observation of Lent. The Tangy Jumbo Shrimp features batter-fried, extra-large shrimp, sugar snap peas and red bell peppers tossed in a new tangy Asian seafood sauce.

The item is available at the quick-service chain until March 31 with it's combination meals for an additional $1 on top of the regular meal price.

Sbarro has introduced a new low-calorie option at all of its 620 U.S. locations. The Skinny Slice is topped with roasted red and green bell peppers, portobello mushrooms, caramelized onions and sprinklings of mozzarella and Pecorino Romano cheeses. The item is 270 calories per slice, and the price varies by market.

The Melville, N.Y.-based chain has yet to determine whether the slice will be a permanent addition to the menu.