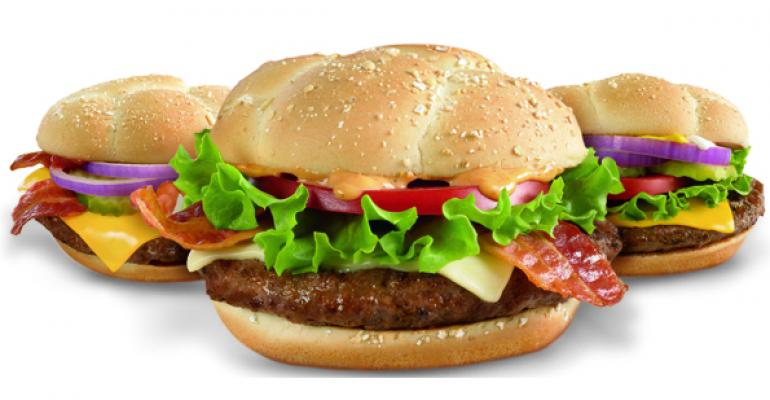 The operative strategies emanating from McDonald’s Corp. headquarters in response to October’s disappointing sales trends have been everyday value and premium new menu items, and some products currently in test market may satisfy the company’s need for both.

This week, McDonald’s restaurants in Northern California began testing three new varieties of Quarter Pounders, while a McMuffin made with egg whites, which the chain had hinted about in September, made its test market debut in Atlanta and Austin, Texas.

Oak Brook, Ill.-based McDonald’s is testing these items during a time of major transition in the United States. Last week, Jeff Stratton replaced Jan Fields as president of McDonald’s USA, one week after the domestic system recorded its first monthly same-store sales decline since 2003. Separately, chief executive Don Thompson had conceded to investors that the slow growth and increased competition in the United States would be a “new normal” for the brand, necessitating a greater marketing emphasis on value platforms like the Dollar Menu and increased innovation for premium limited-time offers.

But Tim Nelson, president of Chicago-based advertising agency Tris3ct, noted that McDonald’s test of new Quarter Pounders and Egg McMuffins incorporates a crucial third lever to be pulled along with value and premium menu items: the core menu. Innovating off signature sandwiches allows McDonald’s to produce the kind of menu news that drives traffic and keeps too much sales mix from skewing toward the Dollar Menu or a la carte orders of lower-cost sandwiches, Nelson said.

“Anything that brings the focus back to core products brings the focus back to bundled meals,” Nelson said. “If you innovate around your signature equities and do things that, while they bring new news to those products, can sell Extra Value Meals, you can work back to … getting customers in the habit of buying core products as part of a meal bundle, as opposed to a la carte.”

“This seems to be the right concept at the right time with the right burger,” Nelson said. “McDonald’s is lucky in that they’ve never played this card, and they’ve had the Quarter Pounder for how long? It’s fortunate that they have something that could be so substantially incremental to their offering and value perception.”

McDonald’s is at a point where there are very few things they could do with a new limited-time sandwich that would not adversely impact other parts of the menu, Nelson said. “The goal has to be optimizing product mix to build the core menu while maintaining visits,” he noted. “It is very challenging, but over the last 10 years, nobody has proven to be in McDonald’s league in this respect.”

While McDonald’s stated earlier that it would increase the output of its new-product pipeline, evidenced by the current limited-time offer of the Cheddar Bacon Onion sandwich, next month’s reprisal of the McRib and a likely rollout of Fish McBites for Lent, Nelson believes the brand is “uniquely positioned” to pursue a menu strategy that does line extensions off signature items.

“Other QSRs just can’t do it; they have a hamburger, not the Quarter Pounder with Cheese,” he said.

He did concede that Burger King had used this strategy in the past with its signature Whopper sandwich, but he argued that overdoing line extensions could erode the novelty effect and harm the value perception of that sandwich, meaning that a chain could have to promote and discount the unenhanced version aggressively to keep selling it after a limited-time offer period.

“When the Whopper is not treated as an LTO, it is dealt heavily,” Nelson said. “McDonald’s tried to get off that with the Dollar Menu, in order to get out of having these two-for-$3 deals [with Quarter Pounders or Big Macs] that the local markets were doing.”

He added that making variations off a core product also makes sense with the company’s test of a McMuffin made with egg whites, reportedly in test in Atlanta and Austin. Creating new news with the signature breakfast sandwich could spur the incremental traffic McDonald’s will need in coming months — when same-store sales comparisons from last winter will be a challenge to exceed — but it also satisfies macro trends, Nelson said.

“McDonald’s is like anyone else who has to pay attention to eating trends, and those are going toward lighter fare, with menu labeling driving the awareness of food’s contents and nutrition,” he said. “Doing this version with a core equity means it’s not a new food form, but it’s an Egg McMuffin that happens to be lower-calorie.”

McDonald’s spokeswoman Danya Proud confirmed that the egg white McMuffin is on track for a planned national rollout in early 2013.

McDonald’s Corp. operates or franchises more than 34,000 restaurants worldwide, including more than 14,000 in the United States.