The parent of Jamba Juice is testing an expanded menu of fresh juice offerings that will be a key element in a new concept design scheduled to debut early next year.

Emeryville, Calif.- based Jamba Inc. has long been saying it is working on the development of a new “juice-forward” concept, with three locations scheduled to open in Northern and Southern California and New York next year. James White, the company's chair, president and chief executive, revealed some details of the plan to Nation’s Restaurant News, saying the new concept stores will include variations in format — including the possibility of a juice-only concept — and a re-imaging that will eventually be applied to existing stores.

Earlier this year, Jamba expanded its juice offerings in what White described as “phase one.”

With the first scheduled to open in Emeryville early next year, the new-and-improved Jamba Juice will feature an expanded range of freshly squeezed juices and handcrafted juice blends, including ingredients such as beets, kale, carrots, apples and ginger, said White.

Jamba has been testing the expanded juice lineup over the past two months at a location in Emeryville, and White said sales of fresh juice at the location have doubled. “What we’re seeing early on is that the fresh-juice customer is a more habitual customer, less seasonal than our core (smoothie) customer,” he said. “We are excited about the long-term prospects.”

About 100 corporate-owned locations within the 788-unit chain are scheduled for a remodel in the first half of 2013. The company is planning to launch a capital expenditure program for the unit remodels and is aiming to refresh 100 units annually over the next three to four years. 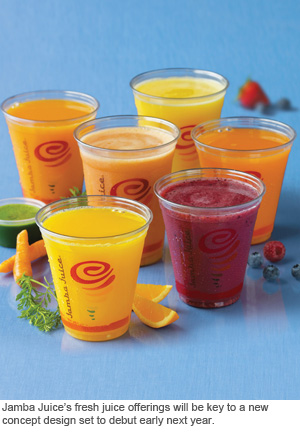 The design of the new stores will be more contemporary and will emphasize freshness, with more fruits and vegetables prominently displayed. “People want to actually see physically the fruits and vegetables, and see you produce it in front of them,” White noted. “Juice out of a tap is a disconnect for most consumers. Our juices are freshly squeezed on the spot, handcrafted beverages.”

Juice has become a popular entry point for the estimated $50 billion health-and-wellness category. Last year, Starbucks bought the Evolution Fresh cold-pressed juice brand and has developed a chain of healthful juice bars by the same name with three locations on the West Coast. In addition, the smoothie chain Juice It Up! has added a fresh juice component to its menu. And small juice bars are popping up in cities across the country as the popularity of juice diets for meal replacement continues to grow.

Jamba Juice has been working to build its position as a health-and-wellness brand, and efforts are paying off, said White, who in 2012 is expecting the chain to see its first year of profitability in six years as a public company.

The company is also rapidly growing its self-service JambaGO automated drink stations in non-traditional locations, including schools. With 239 JambaGO units open in early November, the network is expected to grow to 1,500 by the end of 2013.