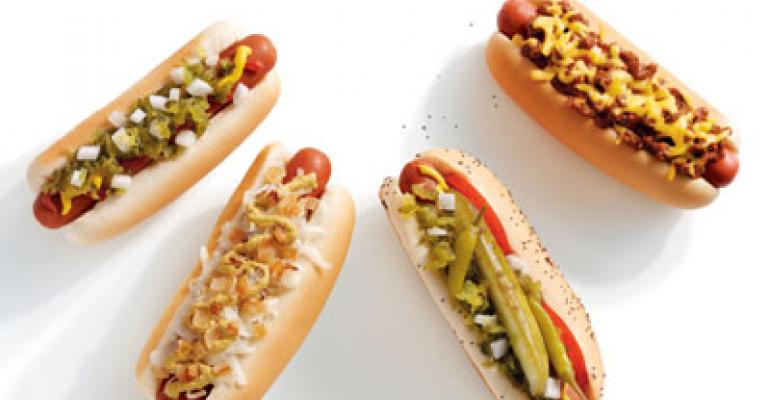 Comps rise as chain’s focus on quality resonates with customers

Sonic Corp. said its systemwide same-store sales trended positive in March and April, leading analysts to speculate on possible menu drivers, like the chain’s new hot dogs, and investors to drive the stock up 12.8 percent Friday.

Oklahoma City-based Sonic operates or franchises more than 3,500 drive-in quick-service restaurants that use carhops. It has struggled quarter after quarter with weak sales for about two years, as devastated economies in the chain’s core markets of Texas and nearby states hurt the restaurant chain, and miscues on pricing put a dent in sales.

Sonic started to reverse those trends in this year’s first and second quarters, after the chain debuted initiatives around new menu items, food quality and advertising focused on the Sonic brand, roller skates and all, rather than just price. On Friday, Sonic said its systemwide same-store sales increased between 4 percent and 6 percent for the first two months of the company’s third quarter, which ends May 31.

The company gave no official explanation in its short statement on sales, but numerous analysts said they believed the improvements were based on a few keys moves Sonic had undertaken recently.

“While difficult to pinpoint the cause of the reinvigoration in Sonic’s trends, we believe a better macro environment, improved product innovation — including a new line of specialty hot dogs — and a revamped marketing program are all contributing to resurgent sales trends,” Sharon Zackfia, a securities analyst at William Blair and Co., said in a report.

Sonic debuted a new line of $1.99 hot dogs in March that extended the chain’s popular chili cheese dog offering. The menu items were billed as high quality items including all-beef dogs and fresh toppings. The new line included a Chicago Dog, a New York Dog and an All-American Dog.

“Investors may be concerned that Sonic’s recent hot dog promotion drove a short term spike in sales,” Larry Miller, a securities analyst at RBC Capital Markets, said in a report. “That’s fair. But we think the trend may be more sustainable than investors think as management has been talking about seeing a broad-based improvement in the business stemming from its other food quality initiatives.”

Analyst Steve West at Stifel Nicolaus said Sonic’s third-quarter trend, if it holds, could lead it to its first positive two-year same-store sales result since 2008.

“The recent television advertising is driving traffic, which is offsetting the likely decline in average check due to the $1.99 price point for the promoted hot dogs,” he said. “Additionally, employment trends have improved slightly in Sonic's core markets of Texas and the lower Midwest.”

All analysts noted that Sonic, like other restaurant chains, would not be immune to rising commodity costs, particularly for beef.

Sonic’s sales update came on the heels of the company’s announcement Wednesday that it was set to refinance its debt facility, using the same securitization strategy it used in 2006. As of Feb. 28, Sonic held about $502 million of notes outstanding under the former facility. The net proceeds of the new facility will be used to repay those 2006 notes in full and for general corporate purposes, the company said.