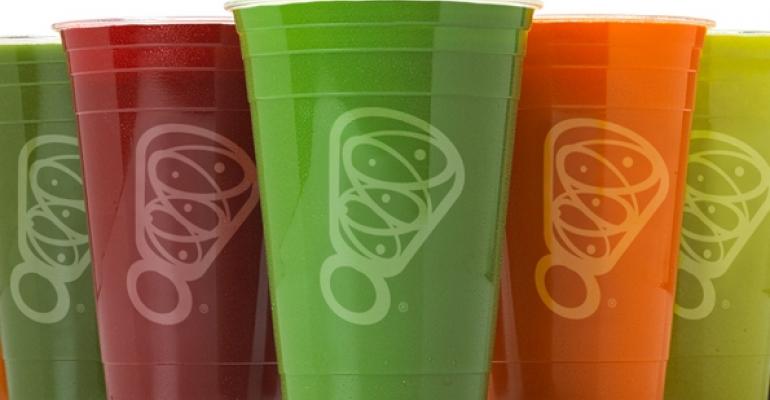 Fresh juice boosts sales at Juice It Up!

Juice It Up aims to tap into growing consumer demand for fresh juices as meal alternatives.

The addition of freshly squeezed juice options at the Juice It Up! smoothie chain has significantly boosted same-store sales, offering further evidence that consumer interest in juicing is growing.

“It’s not all attributable to raw juice, but it’s played an important role in that,” he said.

Juice It Up! began retrofitting its units in August 2011 to install raw juice bars offering blends made with ingredients like fresh fruits, kale, spinach, celery, cucumber, carrots and lemon. The move attempts to tap into growing demand for fresh juices as meal alternatives, commonly known as “juicing,” in which consumers drink their fruits and vegetables in the place of food.

“It’s a very habitual product,” said Carol Skinner, Juice It Up! senior director of marketing and business development. She noted that many customers buy two or more drinks at a time — one to drink immediately and another to cover the next meal.

“We want to meet the demands of people who juice on a regular basis,” she said. “But we’re also really seeing a shift toward a healthier lifestyle with consumers looking for healthy products.”

Seeing the potential of juice

Other chains also see juice as an entry point into the growing health-and-wellness category.

The raw juice bars will be in 53 to 55 locations within the 82-unit chain by the end of 2012, and in 73 units by the end of the first quarter next year, including most Juice It Up! units in California, Easterbrook said.

Though the squeezing of fruit and vegetables is more labor intensive, Easterbrook said, “It hasn’t been an issue for profitability.”

The chain has kept the same lineup of seven blended options, with names like Energizer, Refresher and Detoxifier, though the recipes have been tweaked somewhat to boost nutrients or balance flavor.

Juice It Up! was hit hard during the recession, and the smoothie chain lost about 79 units between 2008 and 2010 in store closures. Last year, however, the company started growing again. Five new stores opened this year, and another 13 are scheduled to open in 2013.

Franchisees have been increasingly attracted to the brand because of the fresh juice component. “It has been a real plus for us,” Easterbrook said.

Correction: December 20, 2012 An earlier version of this story had an incorrect date for estimates of raw juice bar growth. Juice It Up! expects to have the juice bars in 53 to 55 units by the end of 2012.