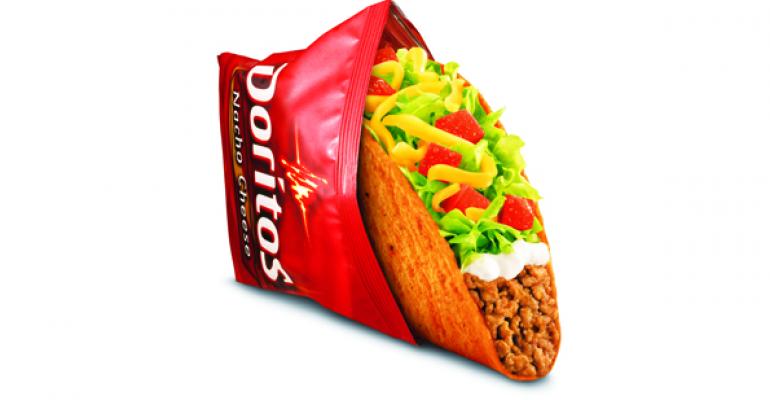 As 2012 comes to a close, one particular menu items stands out among the many introduced by chain restaurants during the year: Taco Bell's Doritos Locos Taco.

That one item has been proclaimed the most successful product launch in Taco Bell’s 50-year history.

The Doritos Locos Tacos was introduced in March, and by the time Taco Bell parent Yum! Brands Inc.'s third quarter ended in September, more than 200 million of them had been sold. The menu addition helped boost Taco Bell’s same-store sales at company restaurants by 7 percent in the third quarter, following a 13-percent increase in the second quarter and a 6-percent increase in the first quarter, when the tacos were introduced. In 2011, Taco Bell reported a same-store sales decline of 2 percent for the year.

Nine months after the national roll out, Doritos Locos Tacos accounted for about 7 percent of the menu mix at Taco Bell, which the company plans to grow with new flavors that are expected keep sales sparks flying into 2013.

The next flavor scheduled to debut is Cool Ranch, but the launch was pushed into 2013, in part to be sure restaurants have an adequate supply of shells to meet demand. A third flavor in test is the chile-lime flavored Flamas Doritos shell, and the company is also testing a variety pack option that will allow consumers to combine different flavored shells.

Steve West, a Wall Street analyst with ITG Investment Research, said the delay in adding new flavors is in part because the chain is still enjoying success with the original nacho cheese shells. “In my opinion, what they’re really saying with the delay is that we don’t need it right now. We’re saving that powder for next year,” he said. “It has been a very compelling product.”

At the end of the day, the Doritos Locos Taco was just another variation on a taco with a corn tortilla, albeit with a roughly 30-cent higher price, said branding consultant Tom Kelley, president and co-founder of AccessPoint Group in San Diego.

What made it work, however, was the co-branding with the known Doritos brand, as well as the social media frenzy surrounding the launch. “It was a brilliant move, though co-branding, in most cases, works,” said Kelley. “But it was also the way [Taco Bell] hung back and let social media take over. That was also brilliant.”

The social media response, however, wasn’t as much under Taco Bell’s control, Kelley noted. “A lot of it seemed to happen by accident.”

In a recent interview in Fast Company, Taco Bell’s chief marketing officer Brian Niccol talked about how the 5,600-unit chain learned to listen and let consumers share their stories about the product, rather than telling them what to think.

“With the DLT, we’ve proven to ourselves that, if you can let go of some of the control, then good things can happen,” Niccol told Fast Company. “Once the idea is no longer just a Taco Bell idea and becomes the customer’s thing, it’s almost like they’re going to socialize for us. They own it. They get convicted about it. The next thing you know, they’re telling their friends they gotta go try it.”

Of course, Taco Bell did promote the product heavily. There was the free taco give away for every base stolen during the World Series. A TV ad used customers’ Instagram images of the taco, and positive customer Tweets were posted on billboards in New York’s Times Square. In addition, the chain airlifted a taco truck to the small town of Bethel, Alaska, and gave away an estimated 10,000 Doritos Locos Tacos to residents.

But the Doritos Locos Taco was not the only smart move by Taco Bell this year, said West. Taco Bell followed up with the debut of the Cantina Bell menu in July, which includes more fast-casual-positioned offerings developed by celebrity chef Lorena Garcia. At the end of the third quarter, the Cantina Bell menu accounted for about 5 percent of the menu mix. 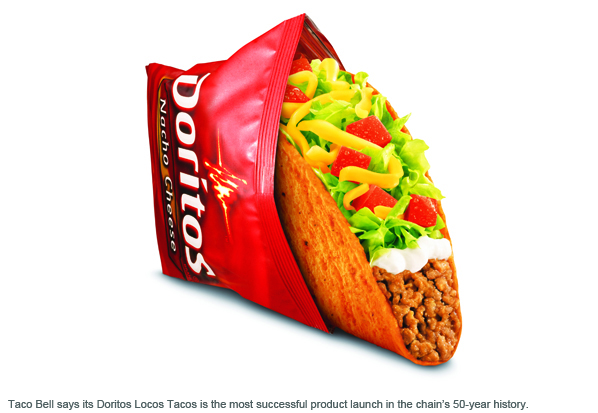 “We’ve seen strong check growth in our data, but also more transactions,” said West. “But it wasn’t just about the Doritos Locos Tacos, it was also about Cantina Bell. They both win, or they get first and second place.”

The Cantina Bell additions, West argued, were more of a category game changer, in part because it has stolen some “fringe” customers from Chipotle Mexican Grill, who might be swayed by the lower price and faster service at Taco Bell for a grilled chicken bowl.

The Taco Bell/Chipotle comparison is similar to when McDonald’s introduced its specialty coffee line, West said. McDonald’s didn’t steal Starbucks’ core customer, but the quick-service chain’s coffee was “in the ballpark” for aspirational Starbucks customers. Some will choose coffee at McDonald’s simply because it’s “faster and cheaper and more convenient than driving an extra mile to find a Starbucks.”

Other restaurant chains have made notable menu moves this year as well. Burger King’s pulled pork sandwich, sweet potato fries and frozen lemonades helped build same-store sales 1.6 percent for the U.S. and Canada in the third quarter, as well as the co-branded mini Cinnabon treats designed to inspire incremental sales.

Wendy’s ongoing menu upgrades have given the fast-food brand a more premium positioning that can compete both with traditional arch rival McDonald’s and Burger King, but also with “better burger” players like Five Guy’s Burgers and Fries and Smashburger, argued Kelley.

Still, he added, “At the end of the day, I think Taco Bell will win [most successful product launch] this year.”