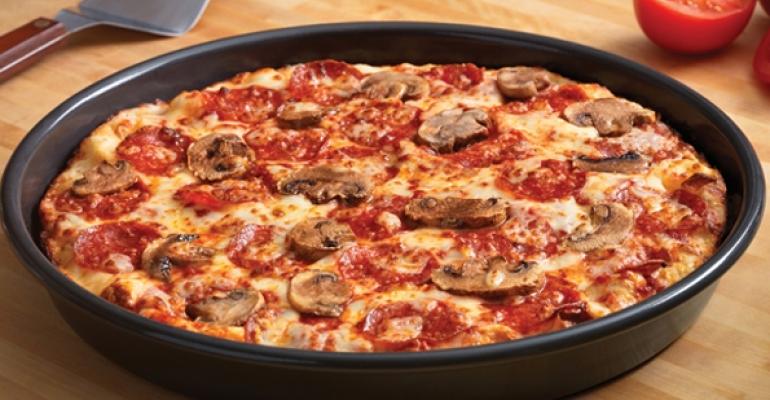 Domino’s Pizza is billing today’s launch of Handmade Pan Pizza as its biggest product introduction since the rollout of its reformulated hand-tossed pizza in late 2009, which drove a major ad campaign and same-store sales turnaround.

The Ann Arbor, Mich.-based chain is introducing the pan pizza with a promotional price point of $7.99 apiece for a medium, two-topping pie at its nearly 5,000 restaurants in the United States. Commercials for the new product will begin running on Monday, Oct. 1.

The pan pizza will feature the same toppings, cheese blend and sauce as the hand-tossed product, but the crust is a brand-new recipe for Domino’s that's made from dough that is never frozen. The pizza also has two layers of cheese, and its toppings stretch from edge to edge.

“There is a standard out there for pan pizza that we realized could be better,” chief executive Patrick Doyle said in a statement. “The reason most people buy a pan pizza is for the crust, and that key component should be fresh, never frozen.”

Pan pizza follows many pizza and non-pizza items to emerge from Domino’s culinary pipeline over the past several years. Following the December 2009 relaunch of its core pizza, Domino’s drove a 14.3-percent gain in same-store sales for the first quarter of 2010, and sales have stayed positive through most of the quarters since. In that period, Domino’s also has introduced Artisan Pizza, Stuffed Cheesy Bread, Parmesan Bread Bites and reformulated chicken wings.

The chain had been developing a pan pizza offering through much of that time as well.

“Twice, really, in our history we’ve done a pan pizza offering, but certainly never to this extent,” spokesman Chris Brandon said in an interview. “We spent about three years on this one, making sure it was ready to go and meeting what consumers wanted.”

In its announcement of the new offering, Domino’s cited research that said one out of every five pizzas ordered in the United States is a pan pizza. As such, Brandon said, the chain’s marketing would not have to educate consumers about what makes pan pizza different from Domino’s core hand-tossed pie, allowing it to talk up what makes Domino’s version of pan pizza different.

“Pan pizza is such a big part of the pizza market, so we’re certainly going to make sure that our fans and customers know exactly what we’re doing,” Brandon said. “It’s not as much about familiarizing pizza lovers with what a pan pizza is; it’s about making sure they know that Domino’s is now in the game.”

Domino’s operates or franchises 9,924 restaurants in the United States and 70 international markets.