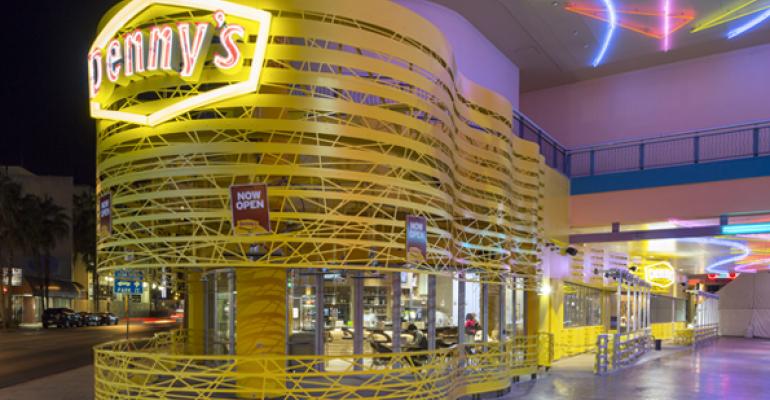 The new location features a full cocktail bar, a photo booth and a wedding chapel

An advantage to owning a restaurant in Las Vegas is that tourists from all over the country inevitably share their experiences with their friends, through word of mouth and web-based sharing platforms.

“Back in January 2011, we launch brand positioning as ‘America’s Diner,’” said Frances Allen, Denny’s chief marketing officer. “We started as the original coffee shop. And, if you like, we like to think of Denny’s as the original social network.”

“Vegas is a perfect fit,” she continued. “Denny’s is open 24 hours a day, seven days a week. Vegas operates the same way.”

The diner chain’s newest location will feature a photo booth in which vacationers and locals can pose with trademark Denny’s products. Those photos, Allen said, can be shared instantly on Facebook and Twitter. 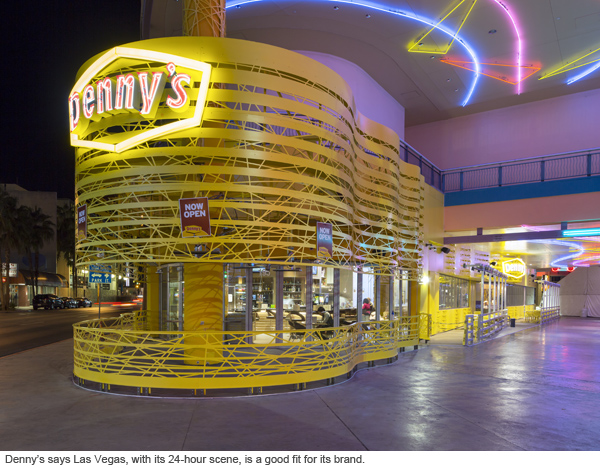 “We wanted to create a unique experience,” Allen said. “We have a lot of interactive features and a lot of things that make this location even more fun.”

For example, she said, the diner has a full cocktail bar. The bar serves, among other items, a bacon-flavored martini.

In addition, the location has some other only-in-Vegas features, including a wedding chapel. “It’s quite a unique experience,” she said, adding that couples can get a cake made out of Denny’s pancake puppies to make their ceremony extra special.

Allen said when she visited Fremont Street, she was struck by Old Vegas’ energy. “There’s so much going on. It’s a local hangout,” she said. “It seems to be building in attractions, like a zip line. And a light show that plays all the time. It’s a huge tourist area.”

For several years, the City of Las Vegas has been trying to revitalize its downtown — an area that was hit particularly hard during the recession.

Although Allen said the city didn’t give Denny’s any rent breaks on the location, she said the company was encouraged by the city to locate its flagship in Las Vegas’ downtown.

“They’ve been very supportive,” she said of the city, adding that Las Vegas Major Carolyn Goodman planned to be at the location’s grand opening. “They have done everything they can to help us make this a standout, iconic Denny’s experience.”

“We think it’s going to be on the list of tourist attractions,” Allen said of the new location.

Denny’s is based in Spartanburg, S.C. and has more than 1,680 locations worldwide.