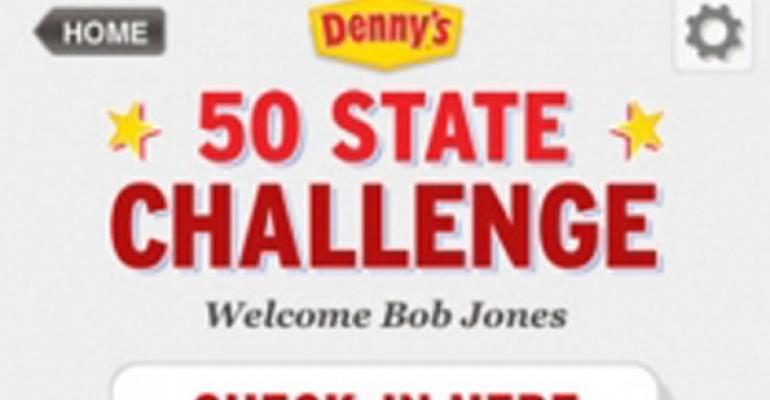 The Spartanburg, S.C.-based family-dining chain released the app and kicked off the 50 State Challenge to promote its Tour of America menu offered for the summer. Customers are invited to “check in” on the mobile app whenever they visit a Denny’s location, and in return, they'll receive digital badges and other incentives.

The program's incentives and rewards include meal discounts and free menu items. The offers show up under a “coupons” tab within the mobile app and are redeemable in Denny's restaurants.

The app, which Denny's developed with New York-based ad agency Gotham and Rain, an interactive media developer based in American Fork, Utah, also includes a restaurant locator and a leaderboard.

The goal of the challenge is to check in at a Denny's in each of the 50 U.S. states. The person who does that first will win a grand prize of free Grand Slam breakfasts for life.

Denny’s will also allow app users to play the game in teams of up to three to accomplish the 50-state mission faster. Groups can link up using their e-mail or Facebook accounts, and if the team wins the challenge then all of the team members will win free Grand Slam breakfasts for one year.

Chief marketing officer Frances Allen said in a statement that the chain’s first mobile app is a loyalty marketing effort aimed particularly at its younger customers, who are heavy users of social media on mobile phones.

“So many of our guests stop in to Denny’s when they’re on their summer road trip, and we wanted to incentivize those adventure seekers to stop in at Denny’s for a chance to accumulate prizes,” she said.

Minneapolis-based Dairy Queen is running a similar campaign through August, the Oreo Blizzard 100, leveraging the 100th anniversary of the Oreo, which the chain said is its most popular Blizzard topping. The promotion is done in teams using Facebook’s check-in feature, and teams that successfully check in to 100 total Dairy Queen locations by the end of the summer will be eligible for a grand-prize drawing for $100,000.

In addition to Denny’s 50 State Challenge, the family-dining chain also rolled out a new mobile-enhanced website to make it easier for customers to navigate using a smart phone.

Denny’s operates or franchises 1,670 restaurants in the United States and six foreign markets.