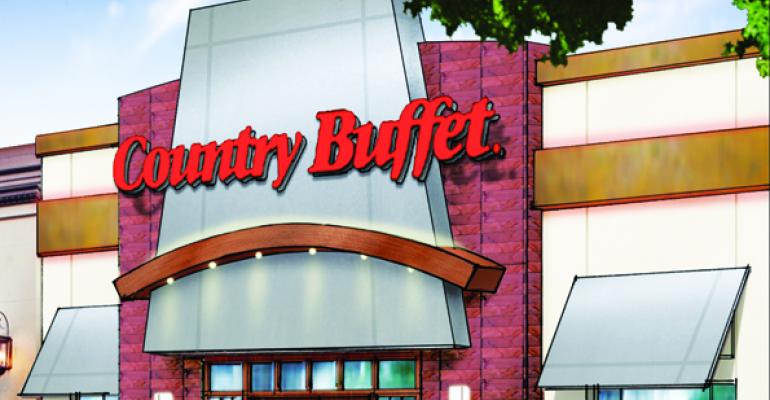 Buffets Inc., the operator of 347 steak-buffet restaurants in 35 states, has named Anthony Wedo as its chief executive to lead the company on its post-bankruptcy "Plan to Win."

The parent company to Old Country Buffet, HomeTown Buffet, Ryan's, Fire Mountain and Tahoe Joe's exited Chapter 11 bankruptcy protection this summer. Wedo said his main task to prepare Buffets for renewed growth in the future would be to shore up unit economics, primarily through better execution and culinary innovation.

"Stay tuned," Wedo said in an exclusive interview with Nation's Restaurant News. "We have a story here that will unfold in the next six to 12 months as we reinvite old guests back and bring in new guests. The company's spent a long time going through a painful process, and I want to lead them to a victory, which could include some new portfolio growth down the road."

Wedo is replacing R. Michael Andrews Jr., who had been chief executive of the company since 2005.

Most recently, Wedo was chief executive of Mainline Capital Advisors LLC, which consulted with private-equity firms on restaurant industry mergers and acquisitions and turnaround management. He began his hospitality career with PepsiCo, rising to vice president and general manager of the Southeast Division for KFC and overseeing more than 1,200 restaurants.

"Tony has demonstrated consistent success in a variety of settings ranging from growth concepts to brand turnarounds," Rob Webster, chairman of the board for Buffets, said in a statement. "He has a proven track record in revitalizing brands. His unique background makes him the perfect leader for Buffets."

Wedo said he and the new leadership team at Buffets, including new chief marketing officer Jason Abelkop and director of consumer insights Tama Looney, can hit the ground running since the bankruptcy proceedings largely cleared up the company's balance sheet, letting management focus on execution.

"There's been a lot of stabilization, and we feel good about the spot we're starting from," Wedo said. "Our Plan to Win will move this thing forward, and I'm here to execute on the plan. Most specifically, I'm focused on recipes and the menu."

He added that culinary innovation represents the biggest opportunity to build frequency with current guests and to attract traffic from new users, as people generally find the buffet chains' convenience, price points and variety to be as compelling as they could be.

Wedo intends not only to review the chains' existing favorites and possibly reformulate some slow sellers, but he also would bring as many new culinary ideas to the buffet tables as possible. He noted that Buffets is keen on building upon ideas like its Mongolian stir-fry and steak products that recently rolled out. 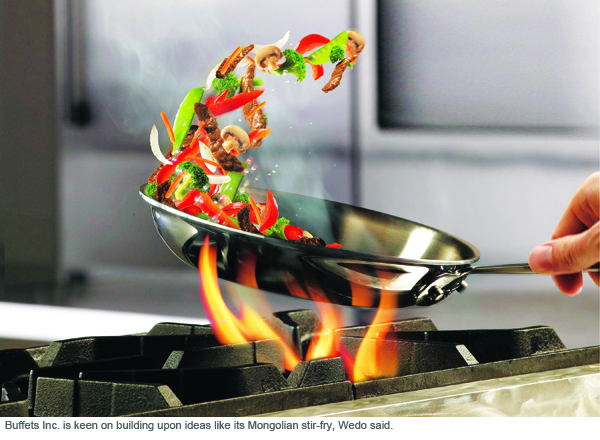 "I want to do thorough testing on a market-by-market basis," he said. "This is all about inviting our existing users in more frequently and inviting new guests. I'm very interested in getting young families back in."

Aside from the occasional store closure, Wedo does not anticipate more large-scale downsizing that occurred during Buffets' bankruptcy process, but revitalizing the look of restaurants that remained in the company's portfolio would get renewed attention in the Plan to Win.

At the time of the bankruptcy exit last summer, the company said much of the increased capital expenditures made possible by a $50 million exit-loan facility would be earmarked for refurbishing stores. Buffets already has completed about 30 remodels, primarily on restaurants on the West Coast, and Wedo said he would remain committed to deploying capital.

"Once we can take a look at these 25 to 30 restaurants, I want to scrub those results and come back with a refined plan on capital investment," he said. "We're going to do it in a way to gain proper returns."

Though no new unit growth is projected in the near term, Wedo remained confident that his entrepreneurial background of growing KFC within a Fortune 50 company and turning around several bagel chains would serve Buffets well and lay the groundwork for resumed growth.

"Frankly," he said, "we need some entrepreneurship here to get some creative juices flowing to reinvigorate the brand for new users."

Buffets Inc. is based in Eagan, Minn. For the company's June 27-ended fiscal 2012, restaurant sales were expected to decline 13 percent to $1.03 billion, from $1.18 billion in fiscal 2011, according to bankruptcy court documents.