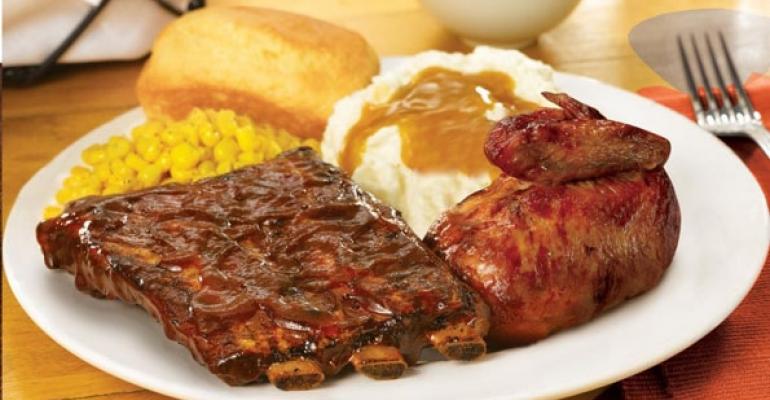 Boston Market hopes its new ribs will give it broader customer appeal.
News

The fast-casual rotisserie chicken chain has launched the item as a limited-time offer, available for eight weeks. The bone-in pork spare ribs are seasoned, smoked and brushed with a proprietary sweet-and-zesty barbecue sauce, which will also be sold bottled in restaurants.

The new item will give the brand broader customer appeal, he said. He expects most guests to prefer a combination of ribs and chicken.

“It’s a very meaty rib, and we felt it fits who we are and what we wanted to do. It complements the rotisserie chicken.

“If it does as well as expected and as well as it did in test markets, we would definitely look at a permanent addition to the menu,” he said.

The ribs are available as an individual meal, starting at $10.99 for a quarter rack with two sides and cornbread, or $12.99 for a half rack. A quarter-rack of ribs with a quarter chicken is $12.99.

Boston Market tested the ribs last year in about eight restaurants in Norfolk, Va., and Buffalo, N.Y. The test was expanded to all units in the Baltimore market in January and supported by TV ads there.

In the test, ribs comprised about 13 percent of protein transactions, second after the brand’s signature rotisserie chicken.

National television ads on cable and on local broadcasts in key markets will support the launch.

The chain is also launching a “We Love the IRS” promotion tied to tax season — except “IRS” stands for “Incredible Rib Specials.” Participating guests can win free gift cards and coupons.

In recent months, Boston Market has been engaged in ongoing turnaround efforts. It marked its 30th consecutive month of positive same-store sales in March, the company said.

The chain is also opening new restaurants for the first time in six years. Five units are expected to open in 2013, with the first under construction in Miami.

Boston Market finished 2012 with a same-store sales increase of 6.5 percent, following an 8.5-percent increase in 2011. Michel said restaurant average unit volumes have improved by $180,000 over the past two years.

The turnaround began in 2010 with the “America’s Kitchen Table” remodel, which focused on enhancing the guest experience with real plates and silverware; creating a guest ambassador to engage with customers; and improving food presentation, including carving meats to order.

Boston Market’s unit count has shrunk considerably from 2007, when it was acquired by private-equity firm Sun Capital Partners. At the time, it had 630 locations.

Over several years, the chain closed underperforming units and those in poor trade areas. Now with 471 locations, Michel said closures have stopped and the company is ready to grow again.

New growth will likely include nontraditional locations, like airports and universities, he said.