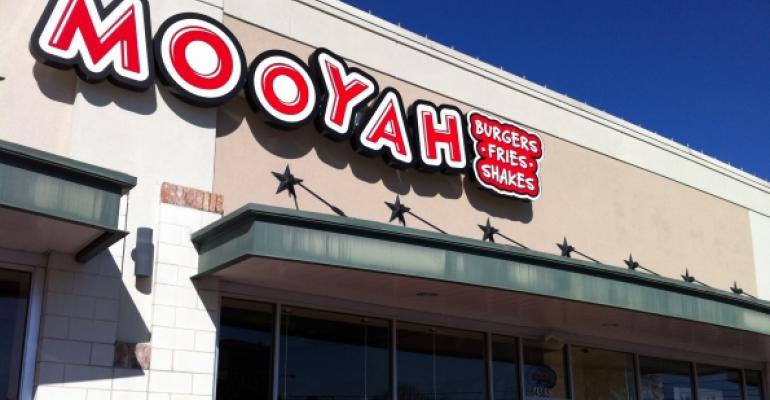 Bill Spae will being his new role as Mooyah&#39;s president and and chief executive in early 2013.

He will begin his new role with Mooyah on Jan. 7, 2013, replacing current president Alan Hixon, who will remain with the company and report directly to Spae in a development executive capacity.

Rich Hicks, co-founder of Dallas-based Mooyah, said in a statement that Spae would be working with “an enthusiastic and successful franchisee base” that just this year has grown Mooyah from 25 locations to 48. “With our current momentum and goals for 2013,” Hicks said, “we believe Bill’s experience with strong, growing brands like ours and his respected leadership in the restaurant industry will set the stage for the Mooyah brand in 2013 and beyond.”

The company’s near doubling of its system size this year resulted from existing franchisees opening their second, third or fourth locations, officials said. They added that international franchising agreements are in place with partners in the United Arab Emirates and Latin America, as well as Canada likely soon.

“I’m excited to be a part of this, and I’ve known Rich Hicks for more than a decade,” said Spae, who also has served in executive roles at T.G.I. Friday’s, Wendy’s, Bennigan’s and Metromedia Restaurant Group. “It’s bittersweet for me: Leaving Cici’s was a tough decision but the Mooyah opportunity was just so compelling, and I had to take it.”

Spae spoke to Nation’s Restaurant News about plans for his new role at Mooyah.

What’s your first goal as CEO of Mooyah?

The thing about Mooyah that I want to do first is to put a strategic plan in place. Entrepreneurial companies are very growth-focused, and sometimes brand strategies get pushed to the side. Thankfully that’s not the case with Mooyah, but I want to make sure we have all the systems and processes that continue growth but ensure that it’s profitable growth.

Any time you move to a new organization you want to get a lay of the land and understand the franchisees and how they operate. I want a three-to-five-year plan that lays out the direction and path that allows our franchisees to grow fast and profitably but also makes sure we’re not over-reaching.

Growing at home and abroad

So how would you approach the planned franchise deals for the Middle East or Canada to not over-reach for the company?

Those deals have been in place, and we’re going to support the growth plans we have underway. When you talk about Canada, if you go international, that’s the place to go, because you can provide that support the operators need and you can pay attention more easily. But when it comes down to any international deal, it’s really about the partner. If you have the right development agent or master franchisee, it’s not as difficult to grow abroad as it would be through direct franchising.

What markets in the United States would you target for expansion?

We still have a great opportunity here in Texas and the surrounding states, but there’s also a lot of opportunity in Washington, D.C., and Virginia, Florida, the Carolinas and New England. We’ll look at this from the perspective of what is our profile, and which trade areas and demographics meet that profile. We’ll grow where we can do so most successfully — and I don’t want to do this scattershot.

The 'better burger' segment seems to have grown fast during the past few years, but it’s crowded. How is Mooyah going to distinguish itself and attract the best franchisees?

'Better burger' is certainly growing, but when you look broadly at fast casual, it’s still a small percentage of the total market. There is still a lot of room, in my view.

If you’re going to compete with the Smashburgers and the Five Guys, it has to be about the experience and about the food. In my mind, we have a differentiated menu, not only with fresh-cut and sweet-potato fries, but also with turkey and veggie burgers and 100-percent ice cream shakes, which all allow much more for a family orientation. The experience is more about the family’s experience, meaning, can they get great food at a great cost and be comfortable, even with small children?

Mooyah’s lunch-to-dinner split typically has been about even. Do you want to shift that mix at all, or the mix of weekday-to-weekend business or urban-to-suburban locations?

There’s a tremendous opportunity in takeout and catering. We haven’t done a great deal of that, and I think there’s an opportunity to position ourselves as meeting the needs of a family for whatever they want. And shouting out the opportunity for takeout can build your dine-in dinner business.