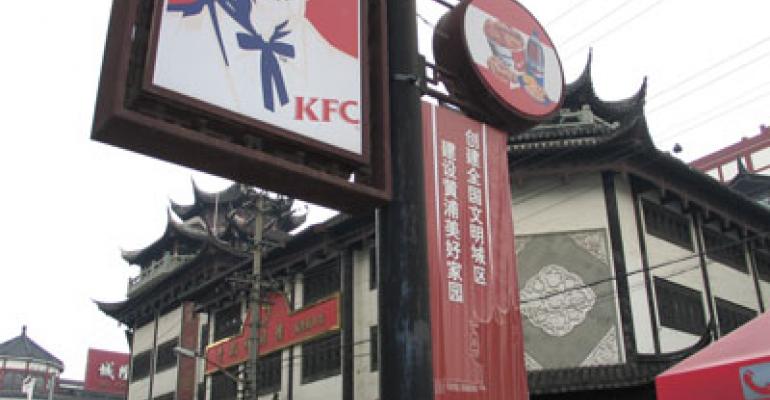 The Taco Bell, KFC and Pizza Hut parent sees growth opportunities in China and other Asian markets despite weakness in the second quarter

Yum! Brands Inc. officials remain bullish on their growth prospects in China, where even its dominant KFC and Pizza Hut chains felt the effects of a slowing Chinese economy in the second quarter, as well as in other Asian markets poised to take off, according to a securities analyst who attended last week’s Yum China Investor Day in Xi’an, China.

David Tarantino of Robert W. Baird & Co. was one of several people hosted at Yum’s China Investor Day, where much of the focus was on how China, combined with upstart markets like Vietnam, Indonesia, Malaysia and the Philippines, would continue to drive the majority of Yum’s growth in annual operating profit. In addition to meetings with Yum China in Xi’an, attendees also visited franchised restaurants in Ho Chi Minh City, Vietnam, to get a sense of operations from Yum’s Asian Franchise Business Unit.

Baird analysts returned home after the meetings and site visits “with greater appreciation of the key advantages that can allow Yum to continue to strengthen its leading position in China and other key emerging-growth markets,” Tarantino wrote in a research note. He generally described those advantages as Yum’s first-mover status, size and support infrastructure in China, as well as its roster of franchisees and brand recognition in emerging Asian countries.

Tarantino noted that Yum in populous China is still “operating from a position of strength,” as its system of more than 5,200 restaurants represents only three units per 1 million people, compared with a penetration level in the United States of 58 units per million people. With several sales-driving programs running at KFC and Pizza Hut and a Chinese consumer class continuing to grow from 350 million people, Yum would be poised to prosper over the long haul, he wrote.

The company’s KFC brand has the much larger size advantage in China, at more than 4,000 units, and the key strategy would be to grow KFC’s average unit volumes in the near term through expanded dayparts and usage occasions, as well as more value initiatives, Tarantino noted. Through May of this year, KFC had expanded its sales mix from breakfast, delivery and 24-hour operations to 16 percent of sales, a significant increase from 2008, when that rate was only 4 percent.

“Yum continues to build upon the wide range of value offerings that produced very strong performance in 2011 and the first half of 2012,” he wrote, “including a range of attractive entry-level price points at each daypart — 6 renminbi at breakfast, 15 renminbi at lunch and 9 renminbi at tea time — that are priced slightly above other street food and local offerings but are competitive with other branded QSR competitors like McDonald’s. … Longer-term, we think the strategy of providing low-hurdle price points can continue to increase usage frequency with existing customers while attracting trial from new customers that are just entering the consuming class.”

Management also was encouraged by the performance of new signature items like Zinger sandwiches and Egg Tart desserts, as well as a 30-renminbi dinner combo meant to kick-start that lagging daypart, Tarantino noted.

Menu innovation also is driving the acceleration of sales and unit growth for Pizza Hut Dine In, Yum disclosed. The casual-dining brand turns over 20 percent of its menu twice a year, and its system sales have grown 35 percent year to date.

Pizza Hut is expected to lead much of Yum’s unit growth in China this year, which will ramp up to 700 openings this year, especially in interior cities and regions, where Yum’s large development and site selection staff stands out as a big advantage over other Western brands, Tarantino noted.

“Management pointed to a range of factors supporting the increase to 700-plus new-unit openings, including robust unit-level returns on invested capital, continued development of new city clusters and transportation hubs, and signs of pent-up demand in lower-tier cities as customers discover the brands after traveling to larger cities or via exposure from Yum’s national television advertising,” he wrote. “We are comfortable that the company can continue to support annual unit development near or above the 2012 targeted level for an extended period.”

Officials from the Singapore-based Asian Franchise Business Unit, or AFBU, also welcomed analysts to view their operations and predicted acceleration in unit growth, which Tarantino believed would contribute to increased profits for Yum in the coming years.

AFBU contributes 8 percent of Yum’s global operating profit and more than one-fourth of annual profit for the Yum Restaurants International, or YRI, segment. The group operates more than 4,500 locations in 13 Asian countries.

“We came away from presentation with a very positive impression of the segment’s commitment to continuing to build strong brands around key platforms for KFC that include Krushers beverages, oven-based items, and breakfast,” Tarantino wrote.

He also noted that AFBU could ramp up development in upcoming years to more than 300 units per year by 2015, compared with about 200 expected this year. Across its emerging Asian markets — meaning essentially every country in its portfolio except Japan — the five-year sales compound annual growth rate was 16 percent for KFC and 13 percent for Pizza Hut.

“While Vietnam represents a very small portion of the AFBU business today,” he wrote, “the site visit and presentations from the two KFC and Pizza Hut franchisees for the market provided valuable insights related to the strong competitive advantages that Yum has in operating strong brands within emerging markets, as well as the impressive quality and sophistication of Yum’s franchise partners in international markets.”