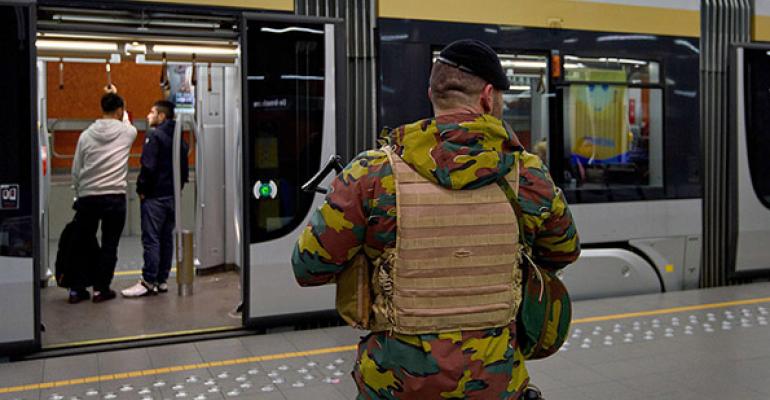 Starbucks Corp. and Domino’s have temporarily closed all of their units in Belgium after a series of terrorist attacks in Brussels on Tuesday.

The explosion at the Brussels airport took place outside of a Starbucks location there, and one employee was injured, the company said. Details on the status of the injured employee were not disclosed, but the Seattle-based chain said all other employees are safe and accounted for.

News reports indicate there were two explosions at the city’s primary international airport, as well as a third in a metro station. According to The New York Times, one of the airport explosions was the result of a suicide bomber.

At least 34 people were killed, including 14 at the airport and 20 at the metro station, with many more wounded.

In a statement, Starbucks said, “We are deeply saddened by the senseless acts that have taken place in Brussels today.”

The company said that all Starbucks locations in Belgium would remain closed until further notice. According to USA Today, Starbucks has seven units in Brussels and 15 in Belgium overall.

“The stores are closed at the request of local authorities, who asked all citizens to stay indoors today,” McIntyre said. “Obviously, it’s very chaotic there and they want as few people out and about as possible.”

The units will reopen once authorities say it’s okay to resume business, he said.

"At this tragic time, selling pizza is the least of our concerns,” McIntyre said.

According to Bloomberg, McDonald’s has 74 restaurants in Belgium, but only one has closed following the attack.

Pizza Hut has roughly 100 units in Belgium, according to the report. Officials with parent company Yum! Brands Inc. did not respond to questions about closures at press time.

Update: March 22, 2016  This story has been updated to include information about other restaurant brands impacted by the Belgium attacks.