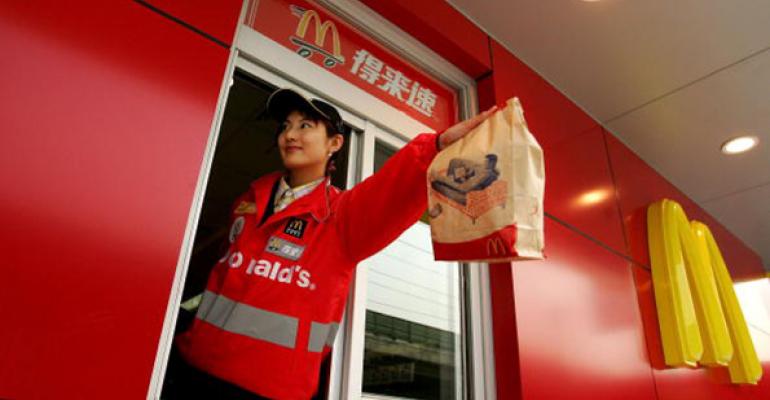 The Service Employees International Union, which is pushing to organize McDonald’s Corp. workers, has opened a new front in its fight: The burger chain’s plan to refranchise more than 3,000 restaurants in Asia.

SEIU sent a six-page letter Monday to hundreds of global firms that might consider buying the restaurants, warning them of the risks associated with a potential acquisition.

“We believe McDonald’s past practices pose risks for its future licensees, those firms’ investors, McDonald’s franchisees in Asia and the workers employed at McDonald’s stores,” SEIU executive vice president Scott Courtney wrote in the letter. “A bad deal for the buyer of McDonald’s business in any one of its major markets could negatively impact these stakeholders for years to come.”

McDonald’s did not immediately respond to a request for comment.

McDonald’s said this year that it is seeking investors to buy restaurants in a number of Asian markets, including Japan and Korea. Refranchising could involve 3,000 locations, and would be part of an effort by McDonald’s to reduce company-owned holdings to less than 5 percent of its 34,000 units worldwide.

The letter states that McDonald’s has a “poor track record in Asia.” It also cites weak performance of McDonald’s Latin American franchisee Arcos Dorados in the years since its IPO in 2011.

According to the letter, McDonald’s has underperformed growth projections in China, South Korea and Taiwan. It also notes that McDonald’s has either stalled growth or is shrinking in two markets, Hong Kong and Japan. Systemwide sales at McDonald’s Japan have declined for five years amid “corporate missteps” that have “badly damaged McDonald’s brand in Asia,” the letter states.

McDonald’s is shifting its strategy in Asia because “it sees limited growth potential in most of its Asian markets,” the letter says, and because the model “allows it to reap significant benefits from stores operating under its brand while transferring both costs and risks to licensees.”

The letter cites McDonald’s 2007 sale of its Latin American restaurants to a consortium of investors that would ultimately become Arcos Dorados Holdings Inc.

Arcos Dorados went public in 2011, opening at $17 a share, and at one point trading at close to $30 a share. But concerns about the brand and the company’s weak performance resulted in a steep decline in share price. Early this year the stock was trading at just above $2 a share, but some renewed profitability brought the stock back up to $5 a share.

Still, the letter said, Arcos Dorados stock has underperformed the S&P 500 index by 139 percent over that time.

The letter states that there is “an inherent misalignment of incentives” between McDonald’s and its licensees. McDonald’s benefits from sales growth because it charges licensees royalties based on revenue. The company also benefits from royalties paid by sub-franchisees of Arcos Dorados.

Licensees and franchisees, however, rely on profits. The letter notes that McDonald’s contracts with its franchisees can exacerbate problems, and that the brand “exerts extraordinarily tight control” over licensees’ operations, including the right to select top managers.

“The performance of some key McDonald’s developmental licensees in other markets around the world exposes some of the challenges to pivoting McDonald’s franchising structure in Asia,” Courtney wrote in the letter.

The letter comes amid a multi-front campaign SEIU has been waging against quick-service restaurants — starting with McDonald’s — in a bid to unionize the industry. SEIU has sponsored protests calling for a $15 minimum wage, and has also targeted the franchise model itself.