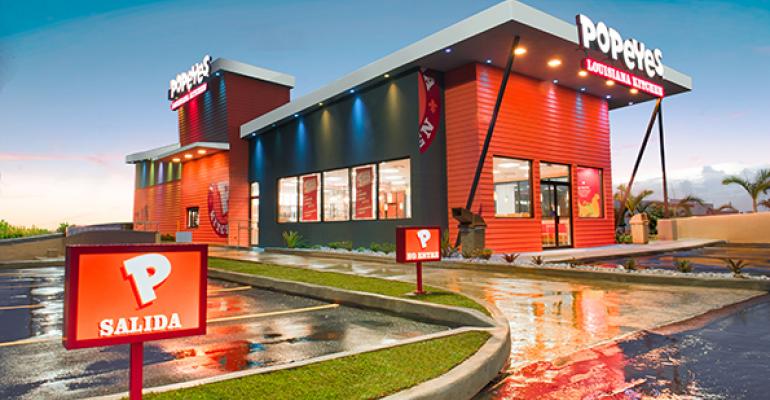 <p>The unit that opened Nov. 6 in Hatillo, Puerto Rico, is the second iteration of the new international design.</p>
Operations>Franchising

Zydeco-inspired design is next step in chicken brand’s transformation

Popeyes Louisiana Kitchen has a new restaurant prototype for international locations that will attempt to spread a little zydeco spice around the world.

On Friday the chain opened its 2,500th restaurant globally, which was in Hatillo, Puerto Rico —  its second unit built with the new international design. The first opened in Costa Rica earlier this year.

Dick Lynch, Popeyes’ chief brand officer, said the redesign represents a commitment of the brand to international growth as it looks to develop new markets.

“The Popeyes brand travels well,” he said. “The Louisiana and New Orleans culture, while not fully understood, is embraced. Chicken is the No. 1 protein and rice is one of the most widely consumed foods around the world. The world is waiting for Popeyes.”

The international reimaging was a next step in the 40-year-old fried chicken brand’s continued transformation.

In 2008, Atlanta-based Popeyes launched a rebranding effort to bring the concept back to its Louisiana roots, changing its name from the former Popeyes Chicken & Biscuits. In 2012, the company began rolling out a reimaging program across the U.S. that was completed in record time, about 2.5 years.

The company is bringing a design refresh to international restaurants with the hope of sparking new growth overseas, where it has 500 units in 27 countries. The largest international markets are South Korea and Turkey.

Popeyes plans to add 85 to 95 new international units in fiscal 2015, but the company has not yet given guidance on plans for new openings in 2016. That will likely come with fourth-quarter results in February. Third-quarter earnings are expected Nov. 11.

The new international design was developed by the same firm that developed the domestic prototype: Tesser, based in San Francisco.

But, rather than repeat the same design used domestically, company officials wanted the look and feel of the restaurants outside the U.S. to be a bit different, said Lynch.

The ultimate goal was to bring the Louisiana heritage to life, just as it was for the domestic design. But international locations needed a more contemporary, youthful spin, he said.

“Our restaurants internationally tend to be more of a destination, a place where groups will congregate, and a little more upscale,” said Lynch. “We didn’t want to move away from or dilute the Louisiana aspect, but we wanted to make it more relevant around the world.”

Tesser used the notion of zydeco music as inspiration. “They said, ‘if zydeco were an architectural style, what would it be?’” said Lynch.

Native to Louisiana, zydeco represents the diverse influences of the various cultures that define the lower Mississippi Delta region, particularly the French Creole and West Africans.

“We had to tell the Popeyes story,” said Lynch. “We had to educate other cultures about what it means to be from New Orleans or Louisiana, and about our food, like red beans and rice.”

The result was a design that is “funky, bold and colorful,” but simple, with asymmetrical angles, he said.

The freestanding prototype has a balcony, with steel across the lower floor and wood on the top, reflecting the style of the Lower Ninth ward of New Orleans. Not all international units will be freestanding or two floors, he noted, but in-line and mall units will focus on other aspects of the design.

Inside, there are murals of jazz musicians and the tradition of Mardi Gras. References to the “seven nations” that contributed to Louisiana culture — Native Americans, French, Spanish, Germans, English, Africans and Italians — are also reflected in wall art.

The new design will be used for new restaurants going forward, but existing units won’t necessarily undergo remodels, as in the U.S., said Lynch.

“Internationally, older units aren’t as in as significant need, as some of ours were in the U.S.,” he said.