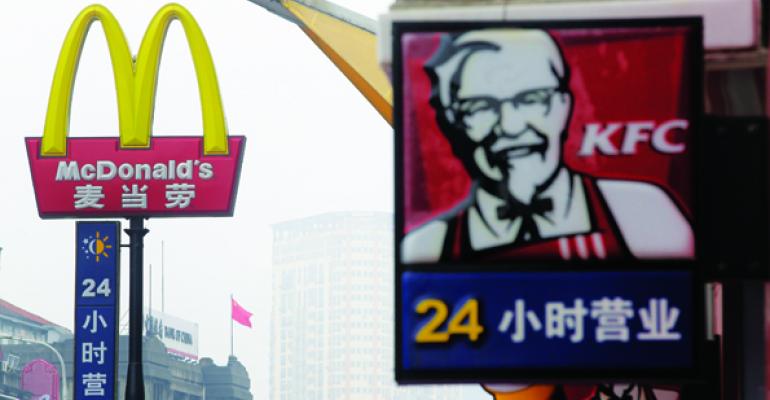 KFC, McDonald's among most powerful brands in China

Two U.S.-based restaurant chains made the list of the 20 most powerful brands in China, as compiled by the brand-equity firm Millward Brown, with KFC topping the ranking.

McDonald’s was No. 7 in the ranking that included Pampers at No. 2 and Colgate at No. 3, according to the New York-based global research agency.

Thirteen brands on the list were American, with two each from Germany and France and one from Italy, Millward Brown said in a release Tuesday. Samsung was the only Asian brand on the list, compiled from research with more than 60,000 consumers in 10 Chinese cities between 2011 and 2013.

“International brands represent many things to Chinese consumers,” said Oscar Yuan, vice president at the Millward Brown Optimor division. “One is trust. In the last three years the brand trust for Chinese brands has eroded as scandals and quality issues have impacted some Chinese products.” International brands also offer prestige and unique points of view, he said.

China, with about 1.3 billion potential consumers, has been a growing market for international brands. Other brands in the Top 20 included Olay, Crest, Apple and Coca-Cola.

Brands in the Top 20 on Millward Brown's Brand Power Index scored significantly higher in such categories as being meaningful, different and salient, the company said. The brands capture five times the average volume share and can command a 13-percent price premium, the company added. 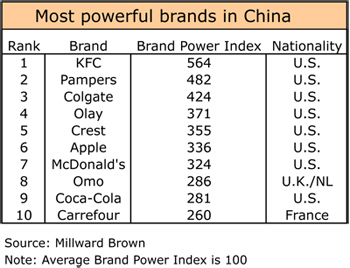 “Success in China requires a deep understanding of the dynamics of Chinese consumers and markets in multiple regions,” said Peter Walshe, global brands director at Millward Brown. He added that consumers in lower-tier cities remain loyal to local brands.

KFC, a division of Louisville, Ky.-based Yum! Brands Inc., had about 4,429 units in China at the end of the second quarter, along with 918 units of Pizza Hut Casual Dining. The company saw a 20-percent decrease in China division same-store sales in the quarter as KFC continued to suffer the effect of negative publicity in China stemming from questions of the quality of that nation’s poultry supply.

McDonald’s, which doesn’t provide specific earnings numbers for China, has nearly 2,000 units in the country.

In June, McDonald’s reported that its Asia/Pacific, Middle East and Africa, or APMEA, division swung to a 0.9-percent increase in same-store sales in May, recovering from a 2.9-percent decrease in April. McDonald’s said China sales were still negative because renewed fears of avian influenza dampened restaurant traffic.

Millward Brown specializes in advertising, strategic communication, media and brand equity research. The firm has 82 offices in more than 50 countries.