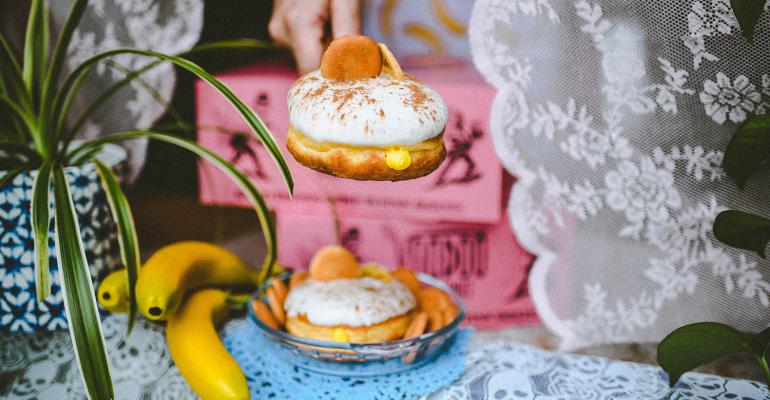 A portion of the proceeds from every Banana Cream Pie doughnut sold will go directly to AFSC’s mission to save lives and bring hope to those affected by suicide.
News>Independent Restaurants

Voodoo Doughnut, known for its handmade and innovative doughnuts, announces its quarterly give-back campaign, partnering with the American Foundation for Suicide Prevention (AFSP) through the creation of the limited-time Banana Cream Pie doughnut. Available through September 26, 2022, at participating Voodoo Doughnut locations, the Banana Cream Pie is filled with banana Bavarian cream, dipped in vanilla frosting, and topped with cinnamon, Nilla Wafer and banana chip.

A portion of the proceeds from every Banana Cream Pie doughnut sold will go directly to AFSC’s mission to save lives and bring hope to those affected by suicide. Banana Cream Pie will be sold at participating Voodoo Doughnut locations in Portland and Eugene, OR; Vancouver, WA; Austin, Houston and Cypress, TX; and Denver, CO.

“We are so grateful to partner with companies like Voodoo Doughnut. They’ve created a product that is delicious and educates people about the importance of suicide prevention, and even better, gives them a way to save lives,” said Kate Steele, Senior Director of Corporate Giving.

“Suicide and mental health issues are at the forefront for many in our local communities across the country, that is why this partnership with AFSP and supporting their cause is so important to Voodoo Doughnut,” said Chris Schultz, Voodoo Doughnut CEO.

Since opening their first shop in 2003, Voodoo Doughnut has been giving back to communities through partnerships with national and local nonprofit organizations that champion causes important to the organization. After formalizing programs in 2019, Voodoo has raised more than $100,000 for partners. With the strong belief that giving back to the community is the right thing to do, Voodoo Doughnut prides themselves in being a leader in healthy, happy communities. They are dedicated to using their resources to make a difference in the diverse communities they serve.

For more than 19 years, Voodoo Doughnut has been the leader in creating innovative and unique doughnuts and are the originators of the now famous Bacon Maple Bar. Founded in Portland, Oregon in 2003, Voodoo Doughnut offers more than 50 flavor options and recently added its first new product, The Cannolo. With focus on the customer experience, employee incentives and giving back to the community through its charitable initiatives, Voodoo Doughnut continues to expand, bringing new stores to neighborhoods across the U.S.

About American Foundation for Suicide Prevention:

Established in 1987, the American Foundation for Suicide Prevention (AFSP) is a voluntary health organization that gives those affected by suicide a nationwide community empowered by research, education and advocacy to take action against this leading cause of death.

AFSP is dedicated to saving lives and bringing hope to those affected by suicide, including those who have experienced a loss. AFSP creates a culture that’s smart about mental health by engaging in the following core strategies: