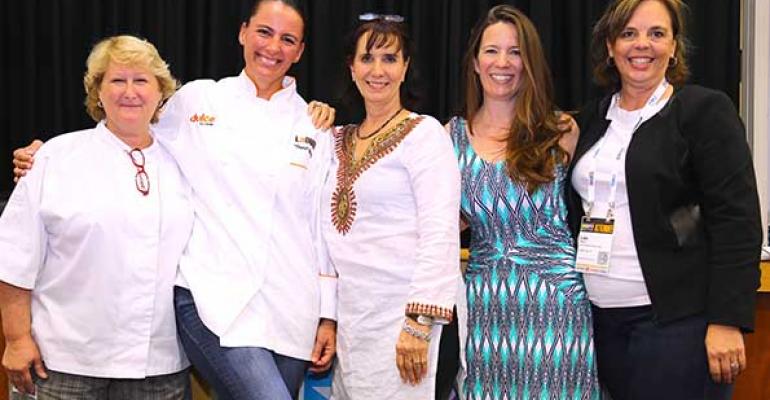 Despite making inroads over the past several decades, women still face hurdles for advancement in the restaurant industry, according to panelists Sunday at the Texas Restaurant Association Marketplace in Dallas.

While the overall numbers are trending toward more gender equality in the industry, perceptions of challenges remain, “Cutting Through the Glass Ceiling” panelists said.

Research released last year by the National Restaurant Association found that more than 45 percent of U.S. restaurant managers were women, compared with 38 percent in other industries. NRA studies found that the number of restaurants owned by women increased 50 percent between 1997 and 2007.

But challenges remain. Nancy Nichols, food and travel editor at D Magazine, said she conducted an informal survey among female restaurant owners and workers in the Dallas-Fort Worth area ahead of moderating Sunday’s TRA educational panel. She said 89.7 percent of respondents said “the highest earning positions in the industry are dominated by men.”

Other panelists acknowledged that gender bias remains the perception in the restaurant industry, although inroads have been made.

“Our industry is certainly full of opportunity,” said Lisa Perini of Perini Ranch in Buffalo Gap, Texas. “If you are a hard worker and see yourself in the industry, there’s plenty of room for advancement.”

However, Carrie Kelleher, owner of Coffee House Cafe in Dallas, said, “The perceptions are still there on women’s ability to manage not only in this industry but industries in general.”

Kelleher acknowledged the irony that the top three managers at her restaurant were men and two assistants were women. She said that reflected the pool of candidates for jobs at her five-year-old restaurant.

“I literally did not have one female candidate for management come in to interview,” Kelleher said.

The pool of female culinary candidates has been growing over the past four decades, said Sharon Van Meter, owner of the 3015 at Trinity Groves event space in Dallas, and incoming president of the Greater Dallas Restaurant Association.

Van Meter noted that when she was at Le Cordon Bleu in Paris 40 years ago, she was the only woman among more than 500 male students.

“Now, 48 percent of graduates are women,” she said.

Dunia Borga, who owns three La Duni Latin restaurants with her husband in the Dallas area, noted that employment opportunities are widely available in the restaurant industry. She said she has always owned and operated her restaurants, even though in her native Latin America that was a rarity.

“Women were in the home,” she said. “They didn’t work. My mother was a homemaker. I moved to America and I was able to look at a different future.”

Perini noted that the restaurant industry reflects the American melting pot as much or more so than other industries, so it affords many opportunities for ownership.

Nichols said that 66 percent of women she surveyed replied “yes” when asked if they had been paid less than a man in the same position over the course of their careers.

Borga noted, however, that in her restaurants, “the highest-paid person is a woman.”

Van Meter said, “You kind of become gender-neutral when that [chef’s] coat goes on.”

Nichols also asked her female restaurateurs about sexual harassment in the workplace, and 64 percent of the respondents said they thought the numbers for the restaurant industry were high.

To inoculate against sexual harassment incidents and claims, Kelleher said her employees sign a contract that outlines workplace dating parameters.

Van Meter said she would be quick to tackle even a perception of sexual harassment in the workplace, meeting with the individual employees and getting them to work immediately on correcting the perception.