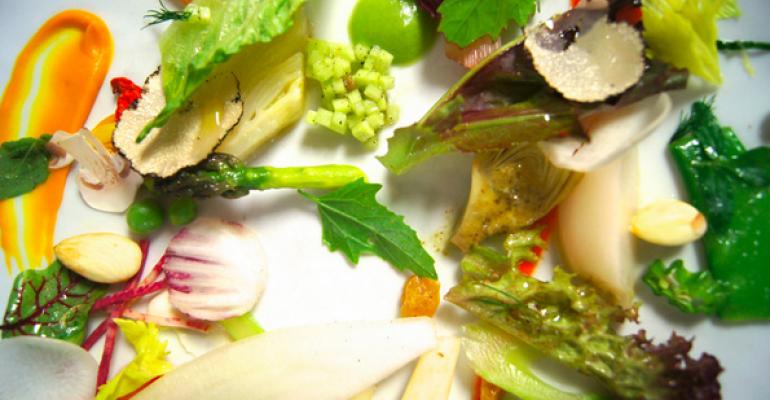 The following column is from Healthy Dining, a company that has been at the forefront of restaurant nutrition since 1990. This series provides restaurant operators with information on industry-related nutrition topics. The views expressed here do not necessarily reflect those of Nation&#39;s Restaurant News.

In 2003 Sid Lerner, a successful ad agency executive, discovered he needed to take medication to lower his cholesterol level and started exploring how to make a meaningful difference in not only his own health but also the nation’s health. He asked nutrition experts at the John Hopkins Bloomberg School of Public Health how much saturated fat should be removed from a diet to make a meaningful difference in health, and the answer he received was 15 percent — just one day’s intake.

And that was the inspiration behind Meatless Monday: Giving up meat for just one day can help save lives and prevent or delay heart disease and cancer.

Launched in 2003, there are now tens of thousands of schools, restaurants and foodservice companies participating in Meatless Monday in 23 countries around the world. The campaign started in the U.S., then gained traction globally when Paul McCartney launched the campaign in the UK in 2009. Australia and Israel launched the initiative last year.


Peggy Neu, director of the Meatless Monday campaign, said the program is growing tremendously. “Our research shows that nearly one in five Americans participates and avoids meat on Monday at least occasionally. It plays into the vegetarian and ‘flexitarian’ trends,” she noted.

Why Monday? “Monday has special significance as the beginning of the week. People view Monday as a day for a fresh start and a chance to set healthy intentions,” explained Neu. “Google searches for the word ‘healthy’ soar on Mondays as compared to any other day of the week.”

Neu and her team are actively recruiting restaurants to promote Meatless Monday menu choices. “It is becoming a positive trend, and chefs and their guests are jumping on board,” she said. “In fact, we have restaurants telling us that their Meatless Monday choices are enticing people to dine out on Monday, and sometimes it is a whole new clientele. It’s easy to do and a celebration of alternatives that focus on fresh, local and seasonal produce.”

All 14 of Mario Batali’s restaurants feature at least two vegetarian entrees as part of his Meatless Monday promotion. “If anybody can entice meat lovers to enjoy their veggies as well, it's Batali," says Lerner, who is founder and chairman of Meatless Monday. "We're delighted that Maestro Mario is helping to move the movement."

John Fraser, executive chef and proprietor of New York City’s Dovetail, a three-year recipient of the Michelin star, has found the Meatless Monday campaign to be very beneficial for business. “We are located on the Upper West Side of [Manhattan], which gets slow in the summer. I was thinking about shutting the restaurant down for a few days each week over the summer,” he explained.

At the same time, Fraser noted, he was starting to leave meat out of his own diet and began focusing on his passion for local, seasonal produce.

“And so I started offering a selection of vegetarian specials every Monday. Pretty soon we were packed on Monday, and it was a completely different clientele — younger and savvy guests,” he said. “They loved the vegetarian choices, and they are a loyal following every Monday…. So it started as a more rogue, artful experiment and now has developed into a whole new market for us.”

Marisa May, co-owner of SD26 at Madison Square Park, recently joined the Meatless Monday campaign. “It is a natural for us. We are eco-friendly and believe in the health benefits of the Mediterranean diet. It’s our natural way of eating,” she said. “Many of our menu items offered all week long are meatless.”

May knew that many of her friends and fellow restaurateurs were participating in Meatless Monday. “We thought, ‘why not?’ We love the initiative.”

May says her guests are very responsive to the campaign and love the emphasis on vegetables, many exclaiming that they have never tasted vegetables that were so good. “Probably the overall favorite is our Vignarola, which is our spring vegetable stew poached in white wine with artichokes and shavings of Pecorino Romano,” she said. “Our guests also love our chilled tomato soup, Sicilian Caponata, spaghetti with tomato sauce and basil, and Uovo in Raviolo.”

Meatless Monday participation grows as plant-based lifestyles are gaining in popularity and acceptance due to interest in health, nutrition and sustainability. Plant-based eating styles range from Mediterranean and “flexitarian,” to vegetarian and vegan, to macrobiotic and anti-inflammatory diets.

These eating plans all emphasize, to some degree, minimally processed foods, including fruits, vegetables and whole grains with some fish, lean meat and/or low-fat or nonfat dairy. The major theme in most of these eating styles is reducing intake of trans and saturated fats by decreasing intake of red meat and processed foods.