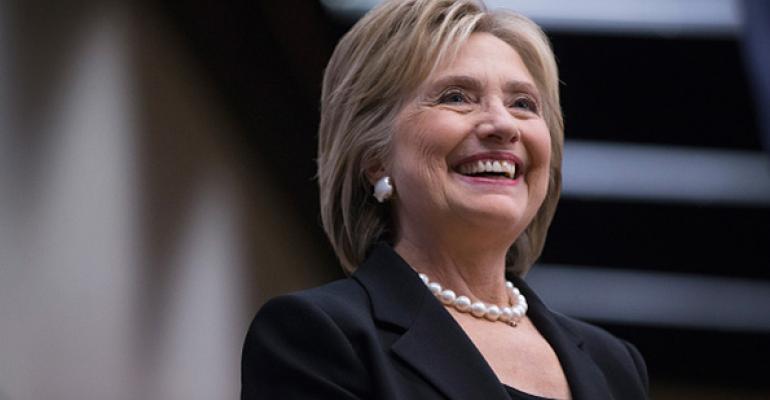 The union behind the “Fight for $15” restaurant-worker wage movement endorsed Hillary Clinton for president on Tuesday.

The executive board of the Service Employees International Union, which has 2 million members, approved the endorsement. The union’s efforts have been instrumental in getting higher minimum wages in Los Angles, New York, San Francisco and Seattle.

“Hillary Clinton has proven she will fight, deliver and win for working families,” Mary Kay Henry, the SEIU’s international president, said in a statement. “SEIU members and working families across America are part of a growing movement to build a better future for their families, and Hillary Clinton will support and stand with them.”

SEIU has been a chief organizer of the “Fight for $15” movement that advocates for increasing the minimum wage above the $7.25 an hour federal level. The movement protested Nov. 10 in 270 cities, targeting restaurants, city halls and the Republican presidential debate in Milwaukee.

However, Clinton on Nov. 3 during two campaign stops in Iowa said she supports a nationwide $12-an-hour federal minimum wage.

Bernie Sanders, Clinton’s chief challenger for the 2016 Democratic Party presidential nomination, has said the federal minimum wage should be raised to $15 an hour.

Joe Kefauver, managing partner of Align Public Strategies, a public affairs firm, said the SEIU’s endorsement is important to Clinton’s campaign. “It adds even more momentum to the Clinton campaign that has already distanced itself from the rest of the field,” Kefauver said in an email. “While this endorsement is a feather in the cap of Clinton, it is a crushing defeat for Sanders, who desperately needed establishment support to legitimize his candidacy.”

Kefauver said the SEIU’s endorsement also provides Clinton money, organizational infrastructure and volunteers. “As a result,” he added, “Clinton well be the beneficiary of a fine-tuned get-out-the-vote machine that will be critical on Election Day.”

The SEIU said in its press release that Clinton has been a leader on such issues as immigration reform with a path to citizenship, voting rights, criminal justice reform and the Affordable Care Act.