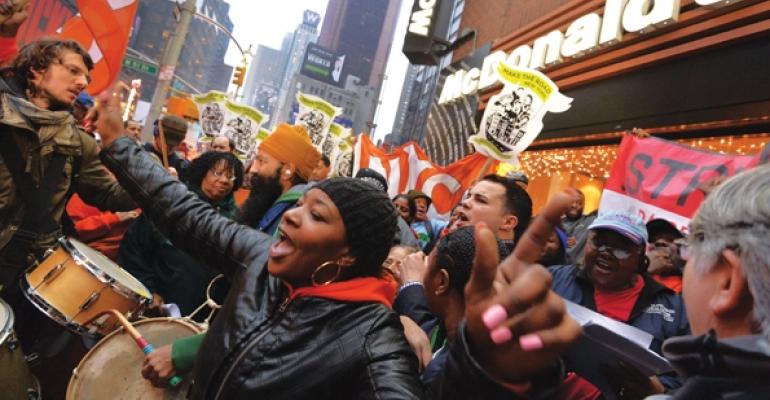 Protests were staged at quick-service restaurants across the United States on Thursday to bring attention to efforts to increase the minimum wage.

Morning protests were reported in Atlanta, Chicago, Detroit, New York City and Washington, D.C. Representatives of various groups, from progressive advocacy group MoveOn to labor unions, had sought to have the protests in 100 cities in support of an increase in the federal minimum wages to $15 an hour from the current $7.25.

Supporters of raising the minimum wage have sponsored a number of protests over the past year to raise awareness of the issue, including May protests of shareholder meetings of Wendy’s in New York and McDonald’s in Oak Brook, Ill., and Aug. 29 protests that expanded to fast-food restaurants in as many as 60 cities.

“Too many hard-working families are being forced to depend on poverty-level wages,” the congressional members wrote. “Paying fair wages and putting more spending money in the hands of consumers will strengthen our economy.”

A McDonald’s representative, however, said the company and its franchisees believe they are giving employees opportunities to succeed.

“We offer employees advancement opportunities, competitive pay and benefits,” said Lisa McComb, spokesperson for McDonald’s USA, in response to email questions. “And we invest in training and professional development that helps them learn practical and transferable business skills.”

“To right-size the headlines, however, the events taking place are not strikes,” she also noted. “Outside groups are traveling to McDonald’s and other outlets to stage rallies. Our restaurants remain open thanks to our dedicated employees serving our customers.”

The National Restaurant Association said in a statement that the demonstrations were a coordinated public-relations campaign “engineered by national labor groups where the vast majority of participants are activists and paid demonstrators; relatively few restaurant workers have participated in the past.”

Rick Berman, the Washington-based lobbyist and founder of the public affairs firm Berman and Co., expressed a similar sentiment. “Just like the Walmart strikes that had fewer than 20 employees walking out from a workforce over a million, these wage actions are nothing more than union-funded protests to create more of a nuisance than a result,” he said.

Efforts toward wage hikes have succeeded recently at the state and local level. In November, New Jersey voters approved a hike in the minimum wage to $8.25 an hour, up from $7.25 an hour. California, Connecticut, New York and Rhode Island also raised minimum wage rates this year.

Large increases in the minimum wage would be detrimental to the restaurant industry, said Scott DeFife, the NRA’s executive vice president for policy and government affairs.

“Dramatic increases in a starting wage such as those called for in these rallies will challenge that job-growth history, increase prices for restaurant meals, especially in the value segments, and lead to fewer jobs created,” DeFife said in a statement. “Business owners already face great uncertainty due to a lack of a clear economic plan from Washington and the health care law’s implementation. Calls to double the minimum wage only intensify the challenges faced by job creators.”

The White House, however, has recently supported efforts to increase the minimum wage. In policy speech Wednesday, President Barack Obama mentioned quick-service workers “who work their tails off and are still living at or barely above poverty” and expressed his support for a minimum-wage increase, which Democrats have proposed raising to $10.10 an hour.

Labor Secretary Thomas Perez also offered support for the protesters. “Their message is simple: they want a wage that allows them to raise their families without living in poverty,” he said of the protesters on his Department of Labor blog.

In addition, opinion leaders like Michael Pollan, author of “The Ominivore’s Dilemma” and “In Defense of Food,” added their voices to the workers’ protests and supported a MoveOn petition on wages.

“Instead of paying workers well enough so that they can afford good, honestly priced products — as Henry Ford endeavored to do so that his workers might afford to buy his cars — we pay them so little that the only food they can afford is junk food destructive of their health and the environment's,” Pollan wrote in an email sent Thursday. “If we are ever to right this wrong, to produce food sustainably and justly and sell it at an honest price, we will first have to pay people a living wage so that they can afford to buy it.”

Senate Majority Leader Harry Reid, D-Nev., has said he expects a vote on the wage hike by year’s end, but the House – where Republican leaders oppose it – is not expected to act on the measure.