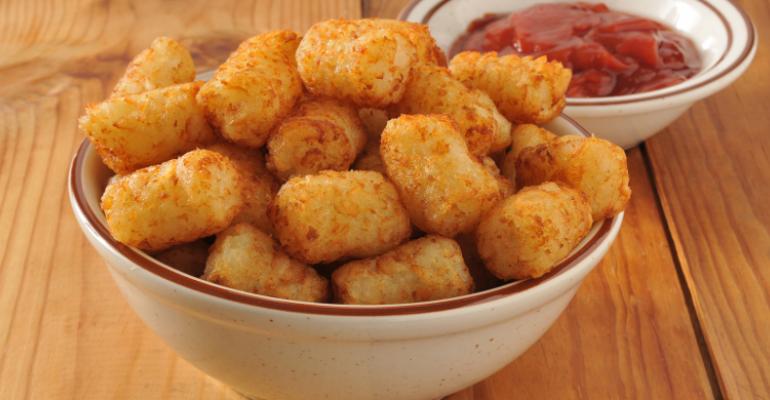 Tots are the trendy shape for potatoes this year

Kids’ favorite grows up with addition of meat, cheese and spices

In the 2004 cult film “Napoleon Dynamite,” the eponymous high school hero takes a minute during class to surreptitiously snack on potato tots stored in the pocket of his pants.

The famous scene has been preserved for the ages on YouTube, and may well have contributed to the item’s raging popularity. According to research conducted by Potatoes USA, tots are the second most widely used frozen potato product in foodservice, bested only by French fries. Datassential reports that their menu penetration has doubled over the past four years. Operators in all segments have been scrambling to exploit the versatility and consumer appeal of the cylindrically shaped tot. 21st century potato skins. Tots are now as ubiquitous as potato skins were a few decades back, and the Loaded Baked Potato Tots at The Cheesecake Factory pay homage to that classic casual-dining appetizer. Filled with cheese, bacon and green onion, the potato-skin-inspired tots are served with the obligatory sour cream, and Sriracha mayo on the side gives them a contemporary twist. Since American diners like cheese as much as they like fried potatoes, savvy chefs have put the two together. The World of Beer chain features shareable Tavern Taters appropriately topped with housemade beer-cheese sauce. The Counter Custom Burgers’ Loaded Tots are loaded with pimento cheese. And Umami Burger recently introduced Cheesy Tots filled with sharp Cheddar and Parmesan cheeses. Chili Cheese Tots at Oklahoma City-based Sonic Drive-In reflect the chain’s Southwestern heritage, while independent Charburger, based in Fresno, Calif., goes upscale with Char.tots made with a trendy, homemade truffle-Cheddar sauce. Burger King reintroduced Cheesy Tots as a limited-time offer in late 2016, with a nod to the influence of “Napoleon Dynamite.” The supporting television commercial featured the film’s heroes, now 12 years older, chowing down on the snack.

Variations on a theme. Some operators use tots as the starting point for more complex dishes. At Rogers Place, home of the Edmonton Oilers professional hockey team, the Potato Tottine pays tribute to both the American tot and Canadian poutine, the north-of-the-border, French-fry-based favorite. It replaces fries with tots topped with the requisite cheese curds and gravy, as well as bacon, Cheddar cheese and sour cream. Johnny Rockets makes its trademarked Loaded Street Tots in varieties like Smoky Cheddar Pulled Pork Loaded Street Tots and Philly Loaded Street Tots. The latter borrows from the chain’s signature Philly Cheese Steak Sandwich by substituting tots for the bun, but retaining thinly sliced, grilled sirloin steak; Cheddar cheese; caramelized onion and green peppers. Milwaukee-based AJ Bombers plays the nostalgia card by promoting tots “like in third grade, only better,” and makes good on the promise with Totcho Tuesdays, in which tots stand in for nachos. They are accompanied by various sauces, vegetables, cheeses and “fancy schmancy” add-ons like barbecue chicken and seasoned beef.

Around the clock. Tots are making the scene at breakfast, too, as with Huddle House’s Hot Tots! promotion, in which tots were layered on open-faced omelets. Options included Four Cheese and Meat Lovers versions.

In a variation on this theme, Bad Daddy’s Burger Bar, a chain based in Denver, touted its Hangover Burger, which was comprised of beef, rosemary ham, cheese and a fried egg atop a bed of crushed tots. The burger was available through the month of January.

Looking ahead, innovation will continue unabated in the potato category, as chefs take advantage of ready supply and customer interest to look beyond the tot for inspiration. French fries are receiving the premium treatment, as with Chowder Fries smothered in creamy clam chowder and bacon at fast-casual seafood specialist Slapfish, or Rarebit Frites with house beer-and-cheese béchamel, house-candied bacon and tomato jam at Avenues Proper Restaurant and Publick House in Salt Lake City. Old-time breakfast standard hash is getting a new look, too. At Bob Evans, Spicy Bacon Hash puts bacon, onions and eggs over home fries with a dollop of spicy Sriracha sauce. And the brunch menu at Spoke & Steele in Indianapolis includes the special Short Rib Hash with spinach, Fresno peppers, fried eggs and breakfast fries.

Nancy Kruse, president of the Kruse Company, is a menu trends analyst based in Atlanta. As one of LinkedIn’s Top 100 Influencers in the U.S., she blogs regularly on food-related subjects at the LinkedIn website.