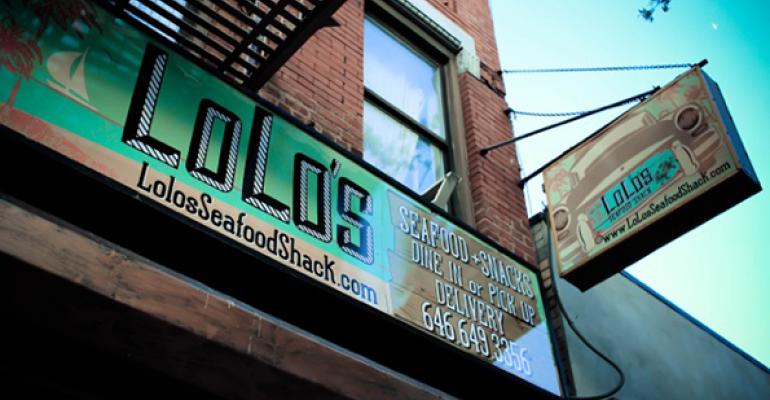 LoLo’s Seafood Shack is a fast-casual restaurant that is not trying to be the next Chipotle.

The nine-month-old restaurant, opened by former fine-dining chef Raymond Mohan and his wife Skai Young, draws its inspiration from casual seaside restaurants — or lolos — on St. Martin and throughout the Caribbean.

“I think people are using us for a great gathering place right now, and that’s what a lolo is,” said Young, whose background is in tourism and restaurant management.

On the menu, Mohan interprets coastal cuisines ranging from his native Guyana to Cape Cod, Mass.

The restaurant is not situated at the seaside, however. LoLo’s is located in the New York City neighborhood of Harlem, in a former Chinese restaurant that happened to have a backyard.

“We inherited the equipment, so the menu had to be configured to match it,” Mohan said.

Although Mohan designed the menu based on the equipment he inherited, he also kept in mind the possibility of expanding.

“The menu is designed to be easily duplicated, and the training is easy,” he said.

The restaurant has fryers, so Mohan makes his own version of conch fritters with Belizean conch in a light rice-flour batter studded with corn and bell peppers, served with rémoulade, priced at $9. The restaurant also has a smoker, so Mohan serves smoked jerk ribs over allspice, priced at $11.

“We wanted to bring really fresh seafood into the neighborhood because in Harlem people love seafood,” he said, adding that he uses the same fish purveyor as the city’s fine-dining restaurants. “It’s the guy that supplies the Four Seasons,” he said.

The seafood includes dogfish, which Mohan uses in an interpretation of a Trinidadian dish called shark and bake — a sandwich of batter-fried fish in a “bake,” or a deep-fried cornmeal flatbread called a johnnycake. Mohan also offers a crab cake and bake, salmon and bake, and lobster roll and bake as a summer special. The bakes are priced at $11 to $12. Mohan also serves an avocado and bake, designed for vegetarians, priced at $9.

Another section of LoLo’s menu is devoted to “steampots,” seafood steamed in a bag with one of four sauces: garlic butter and Old Bay; ginger butter and scallion; coconut curry; and LoLo’s Special Sauce, a combination of the three. The steampots are priced at $9 for shrimp, $10 for crawfish or $19 for a pound of snow crab legs.

Additionally, fried smelt and chips are priced at $9; French fries tossed with garlic paste, cotija cheese and pickled jalapeños are priced at $5; “dutty rice,” a Caribbean version of Cajun “dirty rice,” with peas, bay leaf and coconut milk, is priced at $5; and a variety of vegetables, including corn on the cob, wok-seared cauliflower and chilled broccoli salad, are priced at $4 to $6.

The average check is around $17.

Customers pay at a counter where they can see the open kitchen, and can take their food to go or eat it in the small dining room decorated with art by New York City artists, or in the refurbished backyard — a rare amenity for a restaurant in Harlem. Young said the neighborhood has embraced the backyard.

“It’s a go-to spot for seafood lovers, it’s a go-to spot for people who are adventurous in terms of dining,” she said. “We’ve been really glad to have people engaged and taking pictures of the food. It’s really resonating with Harlem folks who are looking for something different.”

LoLo’s was also recently approved for a liquor license.

“People have said they want this food with beer, and we’d be happy to oblige,” Young said.