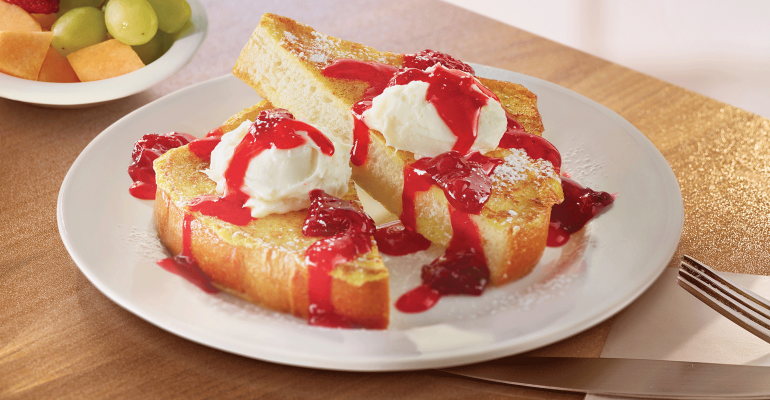 Golden Corral is rolling out brunch nationwide, starting May 22.

The breakfast-and-lunch offerings at the Raleigh, N.C.-based buffet chain will be available every day from 9:30 a.m. to 2 p.m. They include new strawberry cheesecake French toast, made-to-order eggs and omelets, biscuits and gravy, sausage-and-egg skillets and carved glazed ham, as well as fried chicken, pot roast and miniature burgers. Golden Corral CEO Lance Trenary said the chain has been testing brunch in Albuquerque, N.M.; Jacksonville, Fla.; Mobile, Ala.; and Greenville, N.C., for the past six months and found that the new daypart led to higher sales, traffic and profit.

“We can’t wait to roll it out,” Trenary said. “It was really borne out of the idea that, obviously, comp-store sales and meal growth has been difficult to come by, and we were looking for strategic opportunities, if you will, to expand daypart and bring about more options, more choice, for our guests.”

He added that brunch “is inherently a buffet occasion, anyway,” and lends itself well to Golden Corral’s format. The chain already serves breakfast on Saturday and Sunday, but customers have been asking for breakfast offerings during the week, Trenary said.

Golden Corral’s brunch will be supported by an advertising campaign with the tagline, “Your choice rules.”

“No one delivers on choice better than Golden Corral,” Trenary said. He added that customer research indicated that guests like the idea of being in total control of their experience.

Additionally, Golden Corral will start serving breakfast on Fridays, starting at 7:30 a.m. on May 26, with brunch offerings rotating in at 9:30 a.m.

The price of brunch will vary by location, but Trenary said it would be around $8.99.